"The famed Fire Type Emblem lies hidden, waiting to be found...
Mighty foes may stand in our way, but surely nothing a brave adventurer like yourself isn't able to handle!"
Fire Type Emblem will be back and hotter than ever! As a forum game that's somewhere
in-between Pokémon Mystery Dungeon, Pokémon Conquest and Fire Emblem the adventure is brimmed with enemies that await being defeated by a band of Explorers. Speaking of which, the guild is always accepting new players, so why not become an Explorer yourself?

Check out a previous battle if you want to check out how how the game plays out in practice!

Age 29
Male
Texas
Seen 11 Hours Ago
Posted 1 Week Ago
501 posts
1.6 Years
2
July 12th, 2019 at 6:07 PM
I'm one of the players of the game, and just wanted to say that for newcomers, we would be perfectly fine if you wanted to just play as your favorite Pokemon (mine is Azumarill, so I chose Marill as mine to start off since it could not be a fully evolved Pokemon at the time of sign up...although now I think most evolutions can be fulfilled). Just be sure to know that at the time of this posting, you can select any level-up moves up to level 30 when you sign up since you would be joining us for battle 4, where our Pokemon is at level 30 (if you want Cut or Rock Smash, we do have the HMs for them if you want to use them). If you are still not sure what Pokemon you want to be, what would be beneficial for us is type coverage. Our primary type issues will be Bug, Ice, Poison, and Fairy. The first three is able to be covered by one Pokemon each (although one user has not returned yet), and the last is not covered.

Besides playing as a Marill, I'm also serving as a strategist for the group. Sometime after a Player Phase begins, I will post a strategy on what I think would be the best choices for the group to take, though what I mention is merely a suggestion. You can choose to do your own action. If you have an approach you want to make for your character that turn, feel free to do so. This game is a lot of fun, and I think you would have a good time if you did join in.
Current VPP:

Age 29
Male
Texas
Seen 11 Hours Ago
Posted 1 Week Ago
501 posts
1.6 Years
5
July 14th, 2019 at 8:12 AM , since edited
Originally Posted by Tridemo [ Original Post ]
Im in sounds fun! If I can be I would like to be larvesta or volcarona
Be sure to check out the first few posts of the main thread for the sign up template. Since Larvesta evolves at level 59, you will be a Larvesta. You can either decide on what moves (level up moves up to level 30), your Pokemon should have, or you can have Lycan decide some for you. If you're interested in joining, make a reply on the main thread with the sign up, and Lycan will talk you through getting ready for an adventure from there.
Current VPP:

If you have any questions, don't hesitate to ask!
Currently on leave, but I'll return! 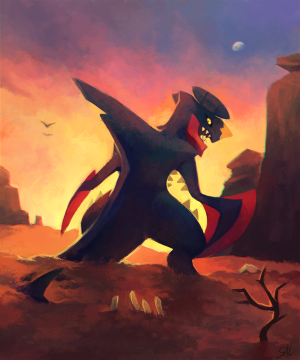 Age 29
Male
Texas
Seen 11 Hours Ago
Posted 1 Week Ago
501 posts
1.6 Years
12
July 17th, 2019 at 8:54 PM , since edited
Originally Posted by TheAlmightyBlaziken [ Original Post ]
This does sound fun if i could join i would be a gible or gabite
We already have a Gabite, although I don't think Lycan has said whether or not there could be more than one of the same Pokemon. We will be starting the next battle soon, but even once it does start, there will still be time to join in if you want (if you want in, post in the main thread using the sign up info on the first post). I am just not sure if Lycan would allow a second Gabite user.
Current VPP:

Age 20
Castle of the Crystal
Seen 13 Hours Ago
Posted 2 Weeks Ago
5,922 posts
7.2 Years
13
July 18th, 2019 at 4:23 AM
Originally Posted by TheAlmightyBlaziken [ Original Post ]
This does sound fun if i could join i would be a gible or gabite
Originally Posted by TailsMK4 [ Original Post ]
I am just not sure if Lycan would allow a second Gabite user.
Oh, I'm sure it's okay to have more than one of the same Pokémon!

And welcome to the forums, Blaziken!
Currently on leave, but I'll return!

As others have already pointed out there's already a player playing as Gabite, so spicing things up with a different Pokémon would probably make things more interesting. That said, if you really want to play as Gible/Gabite, you definitely can! (I'm surprised you didn't pick Torchic/Combusken though, haha.)

Age 21
Male
Hall Of Origin
Seen 2 Weeks Ago
Posted 4 Weeks Ago
1,451 posts
190 Days
15
July 18th, 2019 at 8:28 AM
wait i actually thought you coudnt pick torchic or combusken i change my mind i pick combusken sorry for that anyways the gender is male its ability is blaze and its nicknames Inflame

Age 29
Male
Texas
Seen 11 Hours Ago
Posted 1 Week Ago
501 posts
1.6 Years
17
July 18th, 2019 at 1:33 PM
While the fourth chapter has started, we are still open for anyone wanting to join in! Be sure to check the main thread to see how to join. Once completed, you'll join the team on the search for the fabled Fire Type Emblem.
Current VPP: