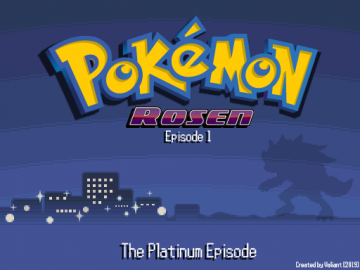 Welcome to the Recruitment Initiative for Pokemon Rosen!
Perhaps I should explain. The year is 2122, and the technology giant Cyber has recently released it's new product: an immersive deep dive system into a world long forgotten by modern culture: the World of Pokemon! At the behest of the Cyber CEO's child the long forgotten franchise was reawoken from the history books and recreated in virtual reality. Not content with simply repeating the past, the team behind this monumental effort created a whole new region, Alyssia! Within it, our dedicated team have created an immersive and dynamic story for you to explore, and introduced a new variant of Pokemon to the A.I-driven populace, the Rosen-formes. Lately, it seems that there have been errors with our program, and NPC's are not behaving as we have come to expect.

In this region, the legendary Professor Oak steps in to assist young trainers, as Alyssia itself has no resident expert to rely upon. He will potentially confer one of three starter Pokemon to them, new Rosen formes one and all.

Urgent help is needed not only to play test what is already avaliable but to chart a course forwards and finish the experience in order for it to be ready in time for the highly antricipated public release.

Before we announce who we would request join this ground breaking team, here are some announcements about the features we already have avaliable:
o 100+ new Rosen Formes (with more to come)
o 334 Pokemon avaliable (with the aim for a complete National Dex)
o 5+ hours of story content (with significantly more by the final story beat)
o 3 Gyms and 1 Challenge Gym beatable (with 8 and 5 planned respectively)
o A dynamic questing system with many side quests in each locale (including main quests, trade quests, side quests)
o 100 Golden Spinaraks to find for a family in need... (with 35 currently hiding around)
o Custom sprites for many important NPC's
o PokeTriad World Championship an optional plot point (unlockable with some tenacious card battling!)
o Unlockable move relearner akin to Legends Arceus
o Unlockable PC box to use wherever you are
o Custom shiny sprites for several classic Pokemon
o Strange Lost Rifts that contain fragements of another world...
o Rebattle enhanced copies of trainers in the Proto Gym for unique rewards...
o HM Items to remove the need for HM's entirely
o Use Nature Therapy to alter your Pokemon's nature at a cost...
o Challenging battles where key NPC's try to overwhelm with tactics
o A world that changes and encourages revisiting old locales

You are the child of the CEO of Cyber, the worlds largest technology conglomerate. At your behest, Pokemon, a long dead franchise, has been revived in the form of an immersive reality simulation that utillises a player's dreams to create realistic experiences and sensations. On the launch day of this project, you are the first to test the system but something unforseen goes wrong - the systems designed to protect you fail, and the failsafes are disabled, sending you spiralling into a test server known as Alyssia ZERO with no memories or recollections on where you came from.

Your journey begins at the behest of Professor Oak who believes they have used strange technology to bring you through to this world, when he tells you that Rosen forme Pokemon come from the same world that you do, and that his colleague, an expert on them, has gone missing. He wishes to see your effect on the world around you, as these Pokemon have been wreaking devestating changes on various ecosystems areound the region.

On your quest, you will encounter the mysterious Team Null who claim to know the reality around them is not quite what it seems, and wish to reduce that world to nothing, to Null... you will not fight them alone however, as oddly familiar figures from a life you no longer remember begin to appear to guide you through an ever changing world within which, you do not truely belong.

Story/Script Writers - Looking for people who can help look through the current story brief and dialouge, address any inconsisties, and help move the story along going forwards.

Mappers - Looking for people who have experience working with the Gen 3 style on RPG Maker who can make excellent maps to spec.

Scripters - This one is exceedingly important. Looking for people adept in scripting to help wit'h various events, plugins, and planned features. I'd love to learn to code and have always done what I can where I can, but I simply don't have the time with my current work schedule or life commitments.

Tile Makers (Interior and Exterior) - Looking for people who have a good knowledge of Gen 3, who can create or modify existing tiles to fit a vision for a new area of the game.

Spriters - This one is exceedingly important. Whereas I love some of the sprites I have created for Pokemon, many of the custom forms are at present pallette swaps until I find the time to adapt them, which I often find I don't have the skill to do. The custom NPC's thus far I have always commissioned, which can be a rather large money sink, too.

Game Testers - This one is currently the lowest priority, as any members of the community who are willing to help out with the above roles will of course be able to playtest the version that already exists. I don't know if you all would consider that a perk or not, but hey, it is what it is :)

Check out our Reddit page for an in-depth look at our started Pokémon Solosis. Or jump on the Discord https://discord.com/invite/f9G8XXYu to offer a helping hand :]