Why would you try beating Black 2 with Delibird?

Yo, it's Christmas time! So it's time to answer the question all of you asked at least once in your lifetime. How can Santa Claus deliver all the presents to kids all over the USA in one night? Well, let's see...

Before I start, let me say some background info about this challenge. I decided to breed Delibird for it, since otherwise I would be stucked with just Present for most of the game and I don't really see a meaningful challenge in that. That's just tossing a coin and hoping for the best result. Because of that, I decided not to EV train my Delibird, limit my usage of healing items in battle and put a small level cap on each Gym. I also went in partially blind, not checking every trainer's Pokémon and not calculating if I'm strong enough to tank/beat an opponent like I did with Sunkern.

Let me tell you the magical tale of how Santa's Helpers saved Christmas. Now, you should probably know that Santa's Helpers all comes from a Unova Route 3's Day Care. They all have specific skills like Ice Punch, Brick Break, Pluck and Attract.

Santa Claus has many enemies, but his biggest competition are the Chinese Dragons and their mistress Iris. One day, she decided to steal Christmas from the whole Unova. Iris challenged Santa to beat her in battle. But Santa's Helpers aren't fighters, so they have to undergo a special training - by beating all Iris' generals. And so the adventure begins.

Our first Helper was really confident in his skills. He quickly beat Iris' first general - Cheren. Her second general Roxie gave Helper a lot of troubles. Especially Roxie's Koffing, who was able to tank all his attacks. There was nothing that could stop him. Except for Dwebble. Those little crabs were specially created to counter Helpers. And so first Helper fails his mission and is beaten by a random Dwebble in Castelia City's Gym. It wasn't even Burgh's Dwebble.

Second Helper was as strong as the first one. She once again beat both Cheren and Roxie without any problems. She trained hard and was able to avenge first Helper. But Dwebble are malicious creatures. General Burgh's Dwebble put an early end to this run.

Now it's getting serious! Those Dwebble will be real problem for this challenge.

This Helper started pretty weak. Almost lost both to Cheren and Roxie, but made it through. His face off with Dwebble was legendary. That little creature smacked Helper down with his Rock-type attacks, but was too weak against his Ice Punchs. Even Burgh's Leavanny had no chance against this Helper.

Continuing on, he challenged Colress. Helper got paralyzed by his Magnemite and was quickly beaten.

Another Helper that was taken down by Colress' Steel-types.

Continuing on, he challenged Elesa. Getting paralyzed by her Flaaffy, Delivery Pokémon had no chance to dodge Volt Switch.

I finally found a great strategy against Magnemite's Sturdy - being overleveled and tank its hits.

Continuing on, this Helper challenged Elesa. Getting paralyzed by her Flaaffy, Delivery Pokémon had no chance to dodge Volt Switch.

Helper 4 was the odd one. She had Hustle as her ability and hept missing all the time. She fell victim to Dwebble gang.

This Helper was determinated to succeed, where others failed. But even he was helples against paralyze powers of Elesa's Flaaffy.

Now this was something. This Helper was able to not only beat Flaaffy with one hit, but also even after getting paralyzed, he was able to tank Elesa's Zebstrika's Volt Switch and beat her with Ice Punch. Another milestone reached.

But the celebrations were cut short. Clay's Excadrill proved to be a lot bigger threat than Elesa's Flaaffy...

Being able to get past Elesa, I just couldn't get the luck to survive any of Excadrill's attacks. He always used Rock Slide that just obliterated Helpers. Krokorok's Intimidate also played a role here, since Helpers dealt reduced damage.

I finally got a luck on my side and this Helper survived Rock Slide with only 3 HP left. But it was enough to beat both Excadrill and Sandslash.

Now this is probably the greatest victory so far. Not only because Excadrill is annoying to deal with, but this also opens competitive items via PWT. I wasn't sure what item I should pick. I was deciding between Life Orb and Choice Band. Both have great attack boost, but also pretty bad limitation. So I decided to go with Muscle Band in the end, which has smaller attack boost, but I can still choose whatever move I can and won't accidentally kill myself.

Skyla was pretty easy, only her Skarmory was annoying. I didn't realize Helper can use Attract on her, so I took more Steel Wings that I should have taken. Anyway, Skyla's down.

But even this Helper wasn't strong enough. When I got challenged by Zinzolin and his Cryogonal was able to kill Helper with combination Grunt's Garbodor. All double battles were harsh, since that usually meant receiving 2 attacks at once.

Let's make this quick. Helper 13 was beaten by Clay's Excadrill. But Helper 14 did wonders and took revenge on Zinzolin. But she was taken down by Durant's critical Crunch on Village Bridge.

Moving on with progress, I was able to somehow survive everything all the way to Team Plasma sidequest. Drayden was easy. Marlon took me few heals, especially his Wailord, but I was able to beat him on first try.

But then new nemesis appeared! Roggenrola guy in Seaside Cave. Each Roggenrola has Sturdy ability and Stone Edge. The very first Roggenrola landed critical hit that took me all the way from full HP to new attempt.

Oh god, how did I got past Excadrill those other attempts? Clay stopped my run 16th run and Gentleman with Durant and Lucario took care of my 17th attempt.

With attempt 18, I was slowly losing it. But this must be THE run! I got past everything. Clay, Colress, Durant Gentleman, Roggenrola guy. Rematch with Colress was annoying, especially because of paralyzation. Kyurem went down to one critical Brick Break. Now who's the Ice-type legendary?

Ghetsis was hard at the beginning. His Cohagrigus put Toxic on Helper, which meant I had to heal with Full Restore at least once during the battle. While under poison, Helper beat Cohagrigus and Hydreigon. I healed Helper on Eelektross and he tanked Thunderbolt. Two Thunderbolts left Helper with 5 HP, so it's another Full Restore when Seismitoad comes in. Rest of his team was easy.

I trained to level 100 and challenged E4!

Shauntal was pretty easy. I was lucky enough to dodge both Will-O-Wisp from her Cohagrigus and Fire Blast from her Chandelure that survived my attack on 1 HP. Rest of her team was pushover.

Grimsley aslo had no chance. I don't think he even got to attack. I'm beginning to think that level 100 was a little bit of a overkill.

Caitlin's Psychic-types stood a little bit better. Since they were bulky, they survived most of my attacks, but weren't really able to hurt Helper with their own attacks. I'm slowly running short on PP, so I had to use Pluck instead of Ice Punch in some instances.

Okay, this run is blessed! Helper dodged Rock Slide from Sawk and then hit Conkeldurr and Mienshao with critical hit. I was sure Marshal would be another run stopper. At this point I hoped to beat Iris, because I don't think I would get past Marshal next time.

I felt bad for Iris. I had answer to all of her Pokémon. Like the only move she was able to use was Dragon Dance on her Haxorus, because he survived Ice Punch with 1 HP. Embarassing. But I got Christmas back!

So here's Hall of Fame: 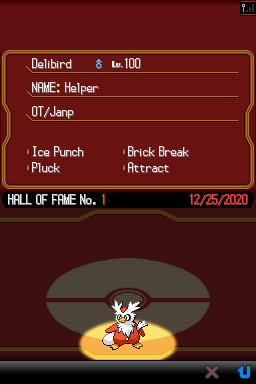 Overall it was fun run. I planned on this being more relaxing run, hence picking Delibird with pretty solid stats. But going blind in some fights proved to be create difficult situations. I think about half the attempts ended becaus of that. I'm looking for more similar runs.