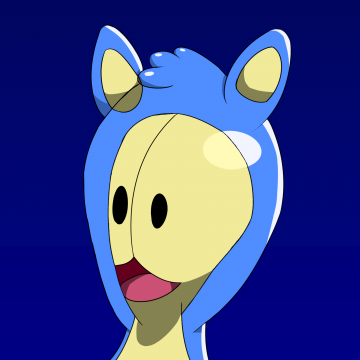 So, here is my problem:
I want the move I'm animating to turn the opponent black and "spread" shadowy figures around it like on the video below.

For some reasons, everything seems to work correctly except for what I mentionned earlier, as you can see here:


Feel free to ask me anything you want and thanks for your help.

Seen 2 Hours Ago
Posted 3 Hours Ago
1,189 posts
1.1 Years
2
3 Weeks Ago at 12:50 PM
Originally Posted by Sulucnal [ Original Post ]
So, here is my problem:
I want the move I'm animating to turn the opponent black and "spread" shadowy figures around it like on the video below.
This is because, either the opponent's sprite is not recognized as such, or the move has the wrong target.

Can you check the cels of Charizard, when it becomes black? I suspect the focus is on Screen or maybe something else, while it shouldbe set on Target as here: 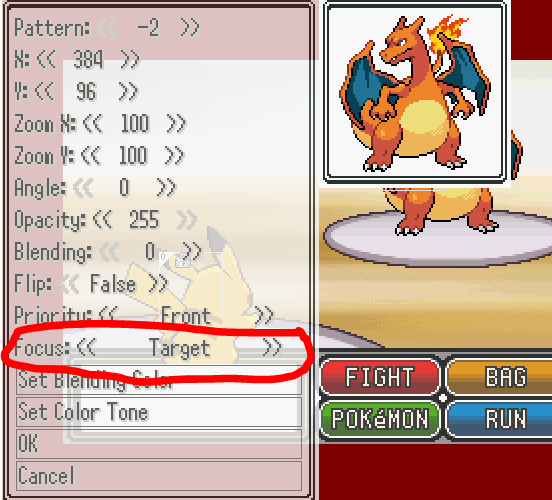 Also, is it normal that the moves does nothing? ("But nothing happens"?) Maybe it's because the move doesn't have a target, so it's not given the opponent in the function that calls the animation.
Maybe you should change the move target to "NearFoe" instead of maybe "User" in the PBS file.

Male
France
Seen 1 Week Ago
Posted 3 Weeks Ago
2 posts
1.4 Years
3
3 Weeks Ago at 1:07 PM , since edited
Thanks for your answer. It's normal that the move does nothing, it's just a placeholder to test my animations, and is not meant to be used as a regular move. I changed the focus for Charizard's cels when it turns black, as well as the shadow cels. I switched from "Screen" to "Target" but it didn't change anything.

Edit: I solved the problem by changing my move to make it a damaging one and the color shifting and shadow work now, but bulbasaur is doing pretty weird things.


Anyway, I feel like I might be able to solve my new problem by myself now, so thanks for your help.

Seen 3 Weeks Ago
Posted 3 Weeks Ago
10 posts
154 Days
4
3 Weeks Ago at 8:48 AM
Since the move reminds me of Leaf Blade, when the animation is fixed, I think that a good name for it would be Shadow Blade