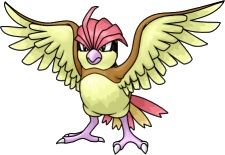 With a new game out, it’s time to generate a brand new Livingdex and explore every inch of a diverse new region. The whole open world thing is a bit daunting and to be honest I don’t want to run to the end of the game and get stomped on by crazy opponents right off the bat. Instead, I have been advised of a sequence of events to focus on so that the level progression of the game makes sense and will try to stick to that throughout my adventure.

So, with that, let’s jump into LA’s Perusal of Paldea! (Wherein I won’t bother to moan about the game’s performance as that’s pretty old news and more than obvious to anyone who has eyes).


Part 1
Did anyone else love how they could customize the look of their character before even taking one step in the game? This was such a nice edit from previous versions and, despite the uniforms being a bit of a limited selection, made me connect with my avatar right away (after taking off the awful hat, of course). Once the tutorial kicked in and I picked up my cutie of a starter, Sprigatito, I was well on my way to…

After stepping out of the cave with Miraidon I thought about the recent captures that were starting to fill my box and realised that this was a good chance to pick up extras of the rapidly evolving bug type, Scatterbug, to make a start on the Livingdex. So, I turn around, look down the hill, and see… a WHITE SCATTERBUG! The Pokeball flew, and I made her mine!

Trotting down to Los Platos, I was so happy to see so many Pokemon on offer! Years ago, the routes leading to the first gym would have 5, maybe 10, different species to pick up but now… well, now it’s on! I caught 33 different species, ignoring evolutions and events, which really was scratching my collector’s itch. And those are just the ones I found! What if there are more that were missed!?

Notable captures this early on included not only my shiny Scatterbug, now a Vivillon, but also a Pachirisu and some Bounsweet which I spied up in a tree! Honestly, the Pachirisu gave it away as I was starting a battle with a trainer and I spotted it next to a tree nearby. When I went over to find it, it was gone! But hearing its cry, I realised that the blighter went UP!

Stumbling up to the city of Mesagoza, my Sprigatito evolved… Oh man, will I be over-levelled for the rest of this game?! >.<

Male
UK
Seen 2 Days Ago
Posted 2 Days Ago
146 posts
6.5 Years
3
1 Week Ago at 7:39 AM , since edited
Part 2
Mesagoza turned out to be a pretty confusing city as I made myself familiar with some of the twists and turns across the map. Most of the buildings couldn’t be entered which seemed odd but, hey, I didn’t feel like I was missing out on much with the exclusion. The thing that actually bugged me more was not understanding the point in all of the school rooms and the dorm room. Does anyone know what the point of them is? I’ll probably come back to it later (I am just finishing “Part 5” today and still haven’t gone back to explore that particular content).

The three storylines of the game (gyms, titans, star bases) give full maps so it’s pretty clear to know what to aim for and the bug type gym leader in Cortondo is first on the list. I set off west and resumed my catching spree for a while, becoming worried that I had gone the “wrong” way at one point as the wild Pokemon were at higher levels than expected, even level 20! I caught everything I could and spotted a very nice bug in a field. Grabbing a Pokeball, I ran over and…

RAN INTO A LEVEL 27 VESPIQUEN! ARGH!!

With my tail between my legs, I ran like a chicken as my team members weren’t even level 18 yet, and took on the Gym instead. The Olive Roll event was a little weird but fun enough. I ended up beating the two trainers to get a very fast path to the basket which took no time at all before Katy agreed to be my first Gym Leader victim. Needless to say, her Bug Tera Type Teddiursa was dead and scone before she knew it! 😆 Wow, that joke took the biscuit! 😂 Material like this makes puns a piece of cake! 😅

Before turning back to the other side of Mesagoza, I took one more lap of the area to make some final captures. One thing I did tell myself was not to catch anything from the Tera raid battles unless I had already found it in the wild – to me, it’s much more fun finding Pokemon where they are intended to be. That said, I’ll smash their faces in for some items without a worry!

Male
UK
Seen 2 Days Ago
Posted 2 Days Ago
146 posts
6.5 Years
4
2 Days Ago at 7:56 AM
Part 3
So, making the backtrack across Mesagoza wasn’t exactly what I was expecting from a recommended route. Sure, some toing and froing but so soon after making a start on the journey? The open grasslands and olive orchards soon became a network of cliffs and ladders which, with the rotating map, made navigation a challenge at first. Good thing was, I didn’t need to worry about falling as my phone doubles as a parachute…

Trundling on my merry way I set about catching Pokemon, battling trainers and watching some of my team members evolve. The most annoying thing though was Slakoth which seemed to taunt my map with its presence without ever actually showing itself. Checking the Pokedex, it is said to spend its time in trees but it never seems to be around when I check them! Similarly, Dunsparce is evading me but trolling the map; I suspect there are caves around here somewhere but so far I haven’t found the entrance.

Passing the roadstop Poke Center, the horrific vision of Klawf met me on the road with a cry that wouldn’t be out of place in a Cthulhu horror story. I mean, WOW, that thing sounds like the aliens from War of the Worlds! To keep them quiet I just shoved them into Pokeballs or drowning them in leaves from my Floragato.
Ending up on the outskirts of Artazon I fell down a cliff and found an amazing spot to make some more captures, including that elusive Dunsparce. More annoyingly for me, however, was that a new troll took its place in the form of Toedscool. I guess I’ll find one sooner or later…

Why oh why must we have these Gym Tests?! If the Olive Roll was a cute gimmick, the Sunflora hunt was an annoying (and incredibly janky) diversion. While still irritated, Brassius, got in my way and took the beak end of my Fletchinder. Now, where to next?...