Age 17
Male
Lion’s Abode
Seen 1 Hour Ago
Posted 4 Hours Ago
794 posts
167 Days
1
December 8th, 2019 at 8:41 PM
Pokémon Dash is the racing game and the first ever Pokémon game to come to the DS. It required swiping the screen to make Pikachu move faster, crossing checkpoints.There were hot air balloon and Lapras rides as part of the races, which took place on varying terrain, which in turn, altered Pikachu's speed. The intro screen had Pikachu on the bottom screen so you could play with it! It is still the least rated game in the franchise, though, with a Metacritic score of only 46/100.
Here's a few screenshots: 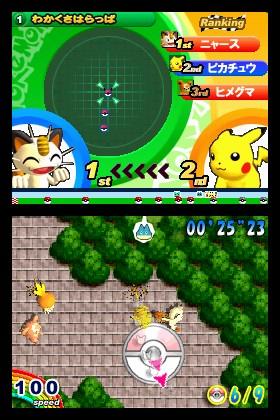 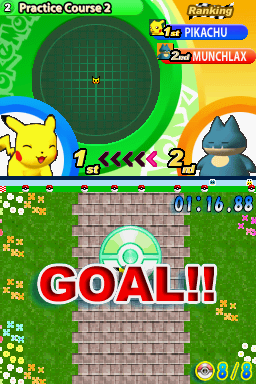 Did you play Pokémon Dash? If so, what are your thoughts on it?

<~Trent loves the fountain above! (And he credits Haychel for the avatar!)

Female
Seen 6 Hours Ago
Posted 10 Hours Ago
27,611 posts
13.3 Years
2
December 9th, 2019 at 9:09 AM
I have honestly never played! It never caught my attention way back when it just came out, I stuck to the traditional Pokémon RPGs. Graphics do look pretty cute though. There was never a sequel, was there? (Or did I just forget??)

Age 23
Male
Milaturia.
Seen 3 Hours Ago
Posted 9 Hours Ago
5,346 posts
11 Years
3
December 9th, 2019 at 10:51 AM , since edited
Pokémon Dash is easily the worst spinoff game I've ever played. You can only play as Pikachu, and the game can be completed within less than an hour. There's just nothing going for it at all, and I agree with all the bad scores it gets. Even the dual slot functionality wasn't at all fun or cool. Maybe if you could race as more than just Pikachu it would have been a fun game, but it just wasn't.

Age 26
Female
Seen 6 Days Ago
Posted 1 Week Ago
37 posts
52 Days
4
December 9th, 2019 at 5:09 PM , since edited
Wow, what a blast to the past for me! Looking back, Dash wasn't the easiest or best game in regards to gameplay and mechanics (rip DS screens everywhere), but I always loved it and honestly still do. Ambrella is awesome with composing music. Their stuff is so atmospheric, and is really, really good at setting a certain mood. I loved all their tracks from the Pokemon games they developed--especially Pokemon Channel and Hey you Pikachu--and this soundtrack was NO exception to that. Man, now you're making me want to listen to the OST. Anyway, I definitely cleared the game back in the day and loved how they implemented the dual-slot technology of the DS. It was really fun importing my party Pokemon from Sapphire and racing on those tracks. They could get pretty difficult though, especially if said Pokemon had a lot of red...in other words, lava. Lol.

However! I'm also looking at this game with nostalgia goggles. Regardless, I loved it when I was younger and still really do, as frustrating as it can be to play. I think they could have done a lot more with it, though.
Advertiser Content