Seen 1 Day Ago
Posted 4 Days Ago
11 posts
22 Days
126
4 Days Ago at 10:55 PM
I understand ... but I hope for the next updates bring us flash and more items that this game can continue spectacular as it promises

Seen 15 Hours Ago
Posted 15 Hours Ago
132 posts
219 Days
128
3 Days Ago at 7:44 AM
Adding Exp. Share and/or raising the level of wild Pokémon a bit might also be a good idea. I enjoyed what I've played so far, but got stuck at the fight for the second key, the level 26 Toxicroak with Poison Jab, Sucker Punch and Drain Punch basically one-shots everything I have, and there doesn't seem to be many options to counter it this early in the game, no good TMs for it either. I thought about training Drowzee since it evolves at level 26, but the wild Pokémon are about like 10 levels behind the trainers level curve.
Cleared rom hacks / fan games: GS Chronicles, Zero, Gaia, Opalo, Celestial Light. 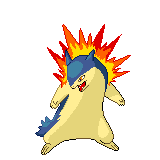 Male
Israel
Seen 1 Day Ago
Posted 3 Days Ago
128 posts
13 Years
129
3 Days Ago at 6:08 PM
Hello!
I've been playing this game for the past few days, I do like the fantasy setting and the available Pokemon, the bosses are very interesting and unique and actually require some strategies, which is something I'm liking a lot.
So far I have 5 keys and I'm interested to see what else is in store!

I have a few things that I did dislike, however.
The early part of this game is a huge slog and almost made me drop it. Even with the 3x speed I had to spend a solid hour on every grinding session for the first two bosses and the following trainer boss. The lack of EXP Share and the fact that most wild Pokemon are low level and give a small EXP really slowed things down to an unenjoyable level. As I progressed (around the time you can reach Yarr Island or Alpine Meadow) my team got stronger and the wild Pokemon started actually giving a decent chunk of EXP, and that's where the game quality started to go up in my opinion. The boss with the Toxicroak was nearly impossible and I had to actually rely on RNG with paralysis and confusion to take it out.

Another thing is the map design.
The maps feel like they are 100% designed to annoy the player with the insanely high encounter rate and the fully unavoidable patches of grass. Only after you get 4 keys you can start buying regular Repels at shops, and until then, in every single non-city map (except the forests), you find a wild Pokemon literally every two-three steps. The game could heavily benefit from earlier-available Repels, a Cleanse Tag, or just redesigning the maps in a way that doesn't frustrate the player. While the maps aren't confusing to navigate, which I appreciate a lot, something must be done about the encounter rate in my opinion.

It's mainly these two issues, but they're big enough for a lot of players to drop this game early on. I'm glad I didn't though because I'm enjoying it quite a bit by now. Keep up the good work!