The ban one draft one idea sounds pretty cool though tbh, it would've increased the stakes for this draft since I think everyone got the mons they wanted. Though obviously it would work only for games with very large dexes like X/Y (possibly Platinum, USUM and SwSh especially with DLC) but you could also do the bans for half of the draft too and then keep it normal for the 2nd half.


Spoiler:
Met with Professor Sycamore before heading to Route 14 and proceeded to beat Serena upon arrival. Went ahead and caught my next team member being Weepinbell, who ended up replacing Gorebyss. Gorebyss was alright but in the end it was pretty redundant on the team and probably won't contribute much in the long run. Shortly after, I used a Leaf Stone I found a while back to evolve Weepinbell into Victreebel. Made it to Laverre City and headed straight to the gym to challenge Valerie. Valerie wasn't too difficult, Pyroar took down Mawile with Flamethrower, Mr. Mime goes down easily to Doublade's Shadow Claw, and Sylveon goes down to the combined efforts of Nidoking and Victreebel's Poison-STAB moves. After receiving the Fairy Badge, I made my way to the Pokeball Factory to beat up more Team Flare Grunts. Side note, the Dusk Stone I mentioned in a previous update is available in the post game, so Doublade is going to be staying a Doublade until I unlock the Terminus Cave (though Doublade has been very good so far).

Anyways, passed through Route 15 and Route 16 and caught myself the Murkrow that I probably won't use and ended up in Dendemille Town. Headed inside Frost Cavern to catch my final encounter being Jynx, after some deliberation I decided that I will be benching Nidoking mainly because most of my team was Kanto mons and I wanted to use more Kalos mons in this run. Pyroar, Azumarill, and Victreebel were necessary for type coverage, Doublade was a general powerhouse, and Jynx was a mon I really wanted to use so in the end... it was a toss up between Hawlucha and Nidoking. After saving Abomasnow from Team Flare at Frost Cavern, I went through Route 17 and made it to Anistar City. Had to battle Serena again before challenging Olympia. Olympia was sort of annoying to beat in the beginning, Sigilyph got 5 flinches in a row (2 of them being crits) with Air Slash which was very inconvenient but, Jynx took it down with Fake Tears and Frost Breath, Doublade takes down Slowking with Shadow Claws, and then Azumarill knocks out Meowstic with Aqua Tails for the Psychic Badge.

Lysandre then announces he's gonna wipe out the face of the planet and I headed back to Lumiose City to go battle Team Flare once again.

Spoiler:
Haven't played in a while so I decided to jump back in. The next update should be my last update since I'll be tackling the victory road + elite four then!

Anyways, entered Lysandre Labs and immediately got thrown into a battle with Lysandre (who was sort of difficult since my answers to Gyarados were limited) but, I pulled through in the end. As for the scientists, Aliana / Bryony / Mable gave me zero trouble however, Celosia gave me a hard time with my team being weak to Drapion and my moves just kept missing a lot during that battle. Received the elevator key from Mable and went down to the 2nd floor and listened to AZ's story on the ultimate weapon, then proceeded to beat Xerosic on the 3rd floor and flew to Geosenge Town again to battle Lysandre inside the hideout. With Serena, I made it to the lowest floor and managed to catch Xerneas. Lysandre then challenges us to a final battle, which was much easier since Mega Gyarados was a lot easier to deal with than regular Gyarados. Lysandre activates the weapon anyways which ends up causing the weapon to collapse on itself and bury the base.

With Team Flare out of the way, I went back to Anistar City to resume my adventure by going through Route 18 and went through Terminus Cave to find the Dusk Stone to evolve Doublade into Aegislash. After the detour, I headed to Couriway Town to meet up and battle Professor Sycamore and then proceeded onwards to Route 19 to battle Shauna, Tierno, and Trevor before arriving at Snowbelle City. Went to Route 20 and the Pokemon Village to find Wulfric and then headed back to Snowbelle City to challenge Wulfric who was a pushover (which he even admits himself). Aegislash OHKOs Abomasnow with Iron Head, Avalugg gets taken down by Pyroar's Flamethrower, and Cryogonal goes down to Hawlucha's High Jump Kick for the Iceberg Badge. Took another trip back to Pokemon Village to pick up the TM for Psychic which was blocked by a waterfall, then onward to the Victory Road.

The Draft Challenge in Pokémon X

Not gonna lie, I was waiting for Tuesday so much, that when it finally came, I started totally different run and forgot my plan to catch Rotom. So I had to wait another week, but this time I got it.

And I got Rotom pretty quickly, only after 2 or 3 SRs. I wasn't sure which Pokémon to box, so I boxed Pidgeot first, but only after few battles, I put it back and boxed Vivillon, because I felt Flying-type moves will be more useful. I continued to Anister and used Rotom as my main Pokémon against Olympia. The battle wasn't hard, but Rotom fainted against Slowbro, so I've used rest of my team to take care of it and rest of Olympia's team.

Team Flare segment was pretty easy and I basically swept it with Lunatone and Lucario (when he wasn't KO'd. How the hell can Lucario lose to Pyroar?). I think this was the very first time in Kalos I actually had counter to Lysandre's team, especially Gyarados.

When I got to Snowbelle City, I decided to change Rotom's form to Microwave, since I needed Fire-type for Wulfric. And I started wondering, why I don't have Fire-type. I was sure I had one. And then, the moment I challenged Wulric, it hit me. I also drafted Litwick! But since the battle already started and I used Litwick line in the other run I mentioned above, I decided to go just with Rotom. Anyway, Wulfric was pushover. He had no way of beating Rotom, Nidoqueen and Lucario.

And so I got to the E4. Because of my masterful planning, I had Vaporeon, Lunatone and Nidoqueen against Malva, Rotom and against Siebold, Rotom, Nidoqueen and Lucario against Wikstrom and Vaporeon and Lunatone against Drasna. Pidgeot took a support role and was there mostly to set up Tailwind or to finish of something with Quick Attack.

I was afraid of Diantha's Gardevoir, but I was able to get there with 5 Pokémon (Lunatone fainted right before her, after taking almost her whole team before Gardevoir down itself), so I was sure I can wear her down. I started by setting Tailwind and then almost beating it with Nidoqueen's Sludge Bomb, but Gardevoir survived with red HP and got healed with Full Restore next turn, while also beating both Pidgeot and Nidoqueen. I then sent out Vaporeon to tank hits while I revived both Pidgeot and Nidoqueen. Vaporeon was able to hurt Gardevoir a little bit with Surf, so I sent out Pidgeot next and she survived Gardevoir's Thunderbolt, set up Tailwind and hurt Gardevoir even more with Quick Attack. Nidoqueen then finished the job with another Sludge Bomb.

Here's the Hall of Fame: 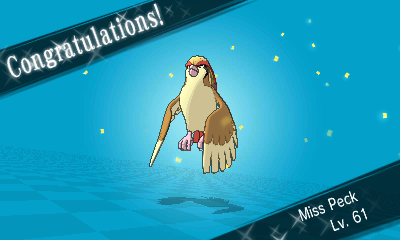 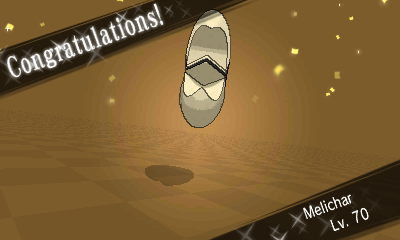 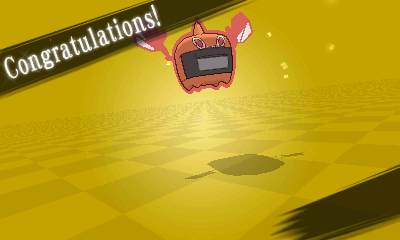 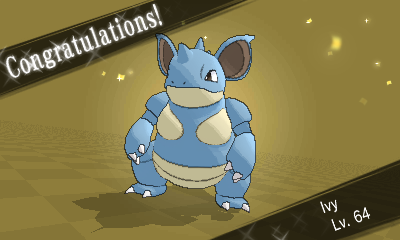 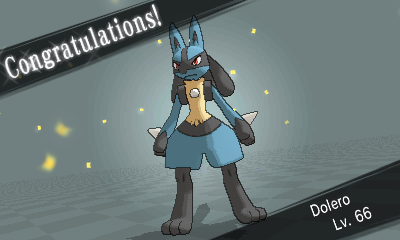 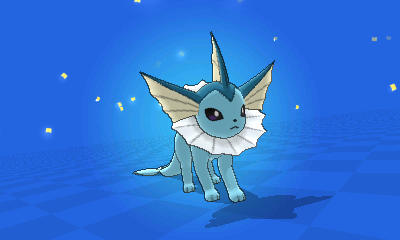 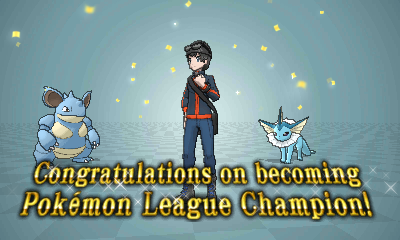 Overall I would say this was pretty entertaining run. You can probably guess that from the levels, but Lunatone was the surprisingly good. Especially once it learned Moonblast. Lucario wasn't that bad afterall, but it's still one of my least favourite Pokémon.

I'm opened for more draft runs in the future.

Overall, I was entertained by this run. I was able to use Pokemon I've wanted to use or never used before, and also play through a game that I have never played before since I bought my 3ds rather late and didn't really wanna drop the money for it. I did take my time during this run to explore since it was a casual draft. I think the upping the stakes for a future draft of Pokemon X/Y would be pretty necessary since it isn't as exciting if you keep getting mons you want but, I had fun overall with this team!


Spoiler:
Left Snowbelle City and went through Route 21 and made it to the Victory Road. Around the midway point, Serena challenges us to another battle which was pretty easy, and then proceeded onward. Made it to the end of the Victory Road, and decided to do some preparations before the Elite 4. Inside the Pokemon League, Malva gives us the standard rundown and then I proceeded to challenge the Elite 4.

I started with Malva, who was pretty easy overall. Her Pyroar went down to Hawlucha's High Jump Kick. Talonflame lands a Brave Bird before going down to Azumarill's Waterfall. Azumarill's Waterfalls takes down Torkoal eventually due to Malva's Full Restore spam. Hawlucha 2HKOs Chandelure with Acrobatics.

Next up I challenged Wikstrom who did give me a little bit of trouble but, was easy overall. Pyroar easily takes down Klefki with Flamethrower. Hawlucha misses High Jump Kick and goes down to Probopass's Discharge, Victreebel revenges with an Energy Ball and Leaf Storm. Scizor gets OHKOed by Pyroar's Flamethrower as well. Lastly, Pyroar tanks a Sacred Sword and 2HKOs Aegislash with Flamethrower.

Following Wikstrom, Drasna was the 3rd Elite 4 member I challenged which went pretty well overall. Dragalge gets 2HKOed by Jynx's Ice Beam and lands a Sludge Bomb before going down. Aegislash 2HKOs Noivern with Shadow Claw, and is able to tank 2 Flamethrowers with the help of Defense Stance + King's Shield. Altaria gets OHKOed by Jynx's Ice Beam. Jynx gets a lucky freeze on Druddigon and it eventually goes down to Ice Beams due to Drasna spamming Full Restores.

Lastly, Siebold was the last one remaining and the one I was the most worried about since my team is pretty Gyarados weak. In the end, Siebold didn't really give me much trouble. Clawitzer and Barbaracle get OHKOed by Victreebel's Energy Ball. Aegislash tanks Starmie's Surf and OHKOs with Shadow Claw. Azumarill eventually takes down Gyarados with Play Roughs after it spends a lot of time boosting with Dragon Dance.

Now all that's left is to challenge the current champion, Diantha which went pretty well overall. Diantha's Hawlucha greedily sets up Swords Dance and gets OHKOed by my own Hawlucha's Acrobatics. Hawlucha misses High Jump Kick and gets taken down by Aurorus's Blizzard, Aegislash revenges it with Iron Head. Goodra gets OHKOed by Azumarill's Play Rough while missing Fire Blast. Gourgeist easily crumbles to Pyroar's Flamethrower, and Tyrantrum gets OHKOed by Jynx's Ice Beam. Lastly, Aegislash tanks a Shadow Ball and takes down Mega Gardevoir with an Iron Head. With that, I'm now able to enter the Hall of Fame! I accidentally clicked speed up so I was unable to get the Hall of Fame screenshots I wanted. After that, the game brings us back to Lumiose City to celebrate, just to be challenged by AZ (who was a pushover). Torkoal gets 2HKOed by Hawlucha's Acrobatics and both Sigilyph and Golurk go down to Aegislash's Shadow Claw. With that out of the way, AZ's Floette comes back and the credits roll. 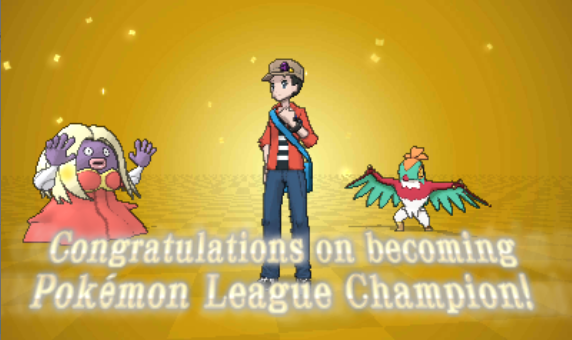 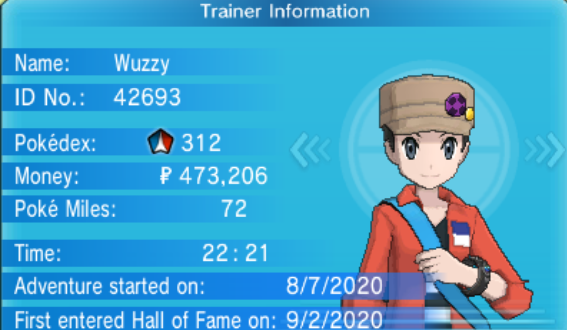