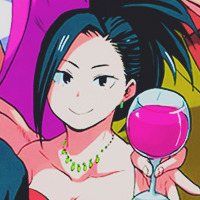 Non-binary
Kansas, Texas
Seen 1 Hour Ago
Posted 20 Hours Ago
88 posts
1.7 Years
1
6 Days Ago at 7:17 AM , since edited
With the release of Pokemon 2019, the catch roster has seemed especially unpredictable!
Like the previous thread,


Use this thread to discuss Ash and Co's captures, and characters' potential teams throughout the series. Try to explain why you think a character may have this Pokemon/may catch it in the future, etc. However, please source official news.
However, don't feel obligated to site official news or sources if you are speculating! But in the event that you are claiming something is confirmed, please remember to do so.

Been hearing speculation about Goh capturing a Sobble. Tbh, I've been wondering for awhile if any of the other Galar starters would be caught by Ash or Goh. Hopefully soon. I've heard speculation thrown around about both Ash and Goh possibly catching Sobble, though, so Idk who I'd rather catch it, tbh. Ash usually at least gets one starter Pokemon in each series, so it's bound to either be Grookey or Sobble eventually, right?

But yeah, right now there is a lot of back and forth if Ash will get Grooky or Sobble. A lot of people don't want Ash to catch Sobble, but there are some who are bashing others who don't think Sobble will be caught by Ash.

All this has streamed from 2 I guess Corocoro scans, one showing Ash catching it and one seemingly showing Goh getting it. As well as Ash catching a Galarian Farfetch'd and Goh catching a normal Farfetch'd. However, none of these are confirmed. I will see if I can find the two scans though.

As for Galar Fartech'd, I think it is the perfect pokemon for Ash. To evolve in game, you have to get 3 Critical Strikes and I just think that matches Ash insanely well. Plus it is probably the most popular Galarian Form because of Sirfetch'd.

This one seemingly confirms Sobble is Ash because it says introducing Ash's Pokemon, however, it doesn't really confirm anything because it is in a different window. Honestly, I hope he doesn't just so the people who are bashing others become disheartened. I just don't think they would give Ash Sobble because it isn't that popular and doesn't really match Ash. Not to mention he hasn't had a grass type that has evolved in a while.

Next, this is the more recently one that seemingly shows Goh with Sobble and Farfetch'd and Ash with Galarian Farfetch'd. I find this one more reasonable confirming what they catch.

Not only that, but Goh has already caught a Farfetch'd.

All and all, I'd prefer Chloe catching Sobble. I think Grookey matches Ash better because he normally gets the monkey pokemon. It is also possible that Ash gets both.

Non-binary
Kansas, Texas
Seen 1 Hour Ago
Posted 20 Hours Ago
88 posts
1.7 Years
4
20 Hours Ago at 6:42 PM
Spoiler:
Sobble
definitelyyyyy looks like it’s going to Ash imo!! Very excited for the relationship they might have if so, kinda cheering it on when it’s down or encouraging it.