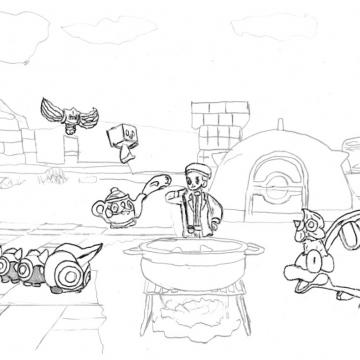 Seen 2 Days Ago
Posted 2 Days Ago
46 posts
31 Days
1
4 Weeks Ago at 12:39 PM
As the title states, the purpose of this team is to serve as a 6-on-6 Singles Champion team for Galar, in the fashion of Red's team from Mount Silver - a balanced team built around the three starters, and I wanted to keep it Galarian. My secondary goal with this team was to ensure no shared weaknesses, but that is not essential - after all, though this team has no shared weaknesses, it also lacks any resistance to Flying, Psychic and Rock other than through Libero, so it is not perfectly balanced. This is not intended for use in Smogon formats, so Dynamax is included.

Rillaboom
Nature: Adamant
Ability: Grassy Surge
Effort Values: 252 Attack / 204 Hit Points / 52 Speed
Item: Choice Band
- Grassy Glide
- Wood Hammer
- Knock Off
- High Horsepower
Role: Revenge killer and Terrain-counter, also my strongest counter to the likes of Dracovish - though not quite enough to take it out in one hit with Grassy Glide, the act of going first is enough to weaken Fishious Rend to easily survivable levels.

One last note is that I find the Life Orb item distasteful, and far better suited for use on Villain-themed teams (unless used on Pokémon with the likes of Magic Guard)

Seen 2 Days Ago
Posted 2 Days Ago
46 posts
31 Days
2
4 Weeks Ago at 8:07 AM
First alteration ideas:
Polteageist would be crippled by any damaging entry hazard, as it relies heavily on its Focus Sash. Thus, I am thinking it might be better to give Weezing Taunt (though in place of which move I am uncertain), and/or equip Cinderace with the Heavy Duty Boots and replace Iron Head with Court Change.
First game: Yellow
Favourite Pokémon: Infernape
Favourite Move: Close Combat
Favourite Type: Ghost
Casual or Competitive: Casually competitve

Seen 2 Days Ago
Posted 2 Days Ago
46 posts
31 Days
3
1 Week Ago at 8:50 AM
I wonder if I should take the lack of replies to mean that the team is fine, that the team is too awful and specific to be improved without rebuilding it entirely, that there is no interest in teams outside Smogon systems, or that the team is simply boring.
First game: Yellow
Favourite Pokémon: Infernape
Favourite Move: Close Combat
Favourite Type: Ghost
Casual or Competitive: Casually competitve

Age 30
Male
Corneria
Seen 1 Hour Ago
Posted 7 Hours Ago
6,677 posts
6.1 Years
4
1 Week Ago at 8:28 AM
I... am confused. What exactly is this a team for? If it's not intended for Smogon, are you using it for VGC Singles? I think the reason people are finding it hard to comment is because they're unsure what you are actually using this in - vital information considering we can then use the right meta to judge this team against.

Generally though - you don't have enough hazard control for Polteageist and also having your hazards setter AND remover as a lead and on the same mon is a bit wild. If G-Weezing dies then Polteageist has a much tougher time and your other frail mons in Cinderace and Inteleon just get chunked down easily.

Cinderace should nearly always be carrying HDB. Due to Libero, it can switch into a lot of unexpected things and combine that with U-Turn for pivoting and this means you can do so very freely. Iron Head can be removed for this, Iron Head is useless on Cinderace.

Replace High Horsepower for U-Turn with Rillaboom, so it can pivot with Cinderace. If Banded, make it max Speed.

What are the 4 points in Attack EVs for Snorlax for? Ditch them, put them into the other stats.
I'm alright, I'm OK, got a private little oasis and his name is Austin..
PC Daily Editor - Come pitch PC Daily ideas with us here!

Seen 2 Days Ago
Posted 2 Days Ago
46 posts
31 Days
5
1 Week Ago at 8:49 AM
Danke, so it was option 3 (ish). I will take the advice on board. I suppose the closest format would be 'Anything Goes', which I foolishly thought would be self-explanatory, though I imagine it makes little difference.
First game: Yellow
Favourite Pokémon: Infernape
Favourite Move: Close Combat
Favourite Type: Ghost
Casual or Competitive: Casually competitve