Seen 2 Days Ago
Posted 3 Weeks Ago
6 posts
47 Days
1
February 13th, 2020 at 8:12 AM
Crazy thought, what if pokemons could keep all its moveset and you could select 4 of them to use at anytime?
What if there is no IV but only EV so you don't have to worry about leveling a mukty ass pokemon throughout the game?

Would you guys play a rom hack or a rpgmaker pokemon game like that?

Age 30
Non-binary
Any dream will do
Online now
Posted 3 Days Ago
11,631 posts
5.5 Years
3
February 13th, 2020 at 8:44 AM
Hmm...that'd be interesting. It'd be similar to other turn-based JRPGs, because a lot of them don't require you to forget skills for new skills. But it'd require a completely different approach to the battle system in all probability...I mean, at the very least the PP system would need to be reworked, because otherwise you could triple the length of battles until you run out of moves. Can you imagine facing a stall team where Pokemon have access to more than 4 moves, and all of those moves have been boosted with PP Ups? You'd be there for days.

Moves would either need to be made weaker, or HP pools would need to be larger to prevent you from carving up everything in your path, you would probably need to do something about breeding for moves otherwise you could break the game even further...I mean, Mew would be TERRIFYING in this scenario too, because it can learn everything.

For all its flaws, limiting Pokemon to 4 moves has always placed a focus on strategic gameplay, and if you remove that limit you change the dynamic of that strategy. I wouldn't say it was better or worse, just different. But you couldn't just do that and expect the game to be any better for it...if anything it'd be worse if that was all you did, because it'd be too easy to make Pokemon that could counter practically everything with its movepool.

Being able to see and more reliably manipulate IVs would be better than removing them, I think.

Seen 2 Days Ago
Posted 3 Weeks Ago
6 posts
47 Days
4
February 14th, 2020 at 10:18 AM
I think the PP would not be a problem if you could bring to battle only 4 moves, but you can keep your moveset and change anytime (outside battle). I have always found weird a pokemon forgeting something he learn, its like they have a goldfish memory or something.

Age 21
Female
Hyperspace
Seen 1 Hour Ago
Posted 2 Days Ago
7,136 posts
9.9 Years
5
February 16th, 2020 at 6:45 PM
interesting. I think they would have to be more restrictive with which Pokemon could learn a particular HM (not EVERYTHING knowing Toxic), and TMs in general would be pretty powerful. I'd hope there'd be a better approach than making everything a bullet sponge, but I'm not really sure what else there is.
paired with colours

Male
UK
Seen 4 Weeks Ago
Posted February 24th, 2020
32 posts
8.3 Years
6
February 17th, 2020 at 6:42 AM
I prefer the way it is now as I feel opening it up as described would take away some of the strategy involved. Besides you can re-learn most old moves if you need to right now with the move tutors? 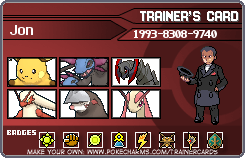