I have posted it exactly as I sent it to the judges, so it needs polishing here and there.

I hope you enjoy reading my little story! 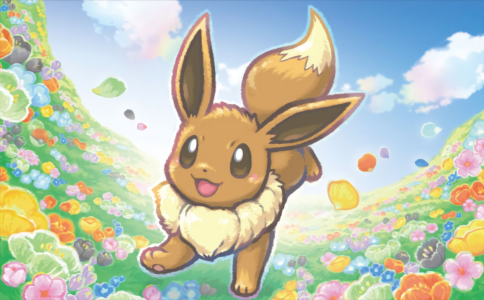 Contentment
It was the first time he opened his eyes, and the world met him in glorious, rainbow-tinted swirls. Shadows waltzed with dappled light upon the forest floor, where ferns and grass and wildflowers nodded to the wind’s gentle song. The sound was liquid silver as it played in the leaves high above. When he looked up, the white orb in the sky winked down at him, making him rub the dazzle-spots from his eyes. The air was warm in his fur and in his nose, thick with the spice of earth-smells and cheri-bush pollen.

A loving croon rumbled in his ears, and Eevee turned around to meet the gaze of his mother. Her eyes were coloured like tree sap when the sun shines through it. They twinkled. He mewed, then buried himself in the heat of her creamy fur. Eevee’s skin tingled when Mother cradled him in her paws and licked him clean.

As the weeks rolled by, Eevee grew strong. His limbs no longer wobbled beneath him like a newly-born kit, and his senses adapted to the swirling sounds and smells and colours of the forest. The beauty enraptured him, his instincts beckoned him to frolick and play, out there, among the bugs and the birds and the zigzagging raccoons.

One late spring morning, Mother released the restless kit from the protection of her embrace. He was off without a moment’s hesitation. The curiosity of his kind urged him to find his place in life, to be someone. She knew he would not be content until he found it. Yet her heart longed for his safe return.

On the very first day, Eevee wandered through the trees, dug at the soil, gnawed at moss-covered rocks and played chase with the Beautiflies. He found living mushrooms and flowers with faces, and weeds that sprung into Pokémon and drifted away when he got too near. For some time he lived like this, together with the plants, thinking that like his mother, he’d be satisfied as a leaf-fox. But the mushrooms did not like him, and the flowers fled from him, and he grew tired of their spores that made him sick, and of the berries that tasted bitter.

In the summer, Eevee discovered a wide, shimmering river, where golden fish swam freely and water-creatures dug their nests. He’d watch them diving in and cutting through the river like birds in the air. It seemed so pleasant, to drift on the cool current as they did without a trouble in the world. Eevee longed to join them. He soon took courage and sprang into the river just as he’d seen the water-creatures do.

The moment he did, that courage drained from his spirit, overtaken by the rush of water that engulfed his senses. It stung his eyes, deafened his ears, compressed his lungs, and he was helpless against its pull. Through sheer instinct did Eevee claw his way to safety, a figure of limp, sopping wet fur slumped across a bed of stones. For a moment he simply laid there and cried. The river rejected him, just as the forest-dwellers had.

Summertime was drawing to an end when Eevee discovered the terror of fire and lightning. The roiling, angry froth of black storm clouds seized the sky, but not a raindrop was shed on the parched land. Eevee’s fur prickled and fuzzed with static. The tension was thrilling, at first. Then the great spears of lightning struck. Eevee instinctively cried out for his mother when the crackling boom exploded all around him. He saw trees felled in a single strike, embers scattering across the dry undergrowth as flames roared into being. And it burned. The very air burned his skin.

His eyes shot wide with panic and tears, and abandoned by his courage, the little Eevee fled. Far behind him, the flames grew so tall they licked the storm clouds.

By late autumn, Eevee began to wonder if the world had a place for him after all. He was still young, and in his heart, he felt he had no room to grow. Every one of his kind had a place they belonged—an element their spirit bonded with, a life of sweet content.

Each night he endeavoured to find this contentment in the darkness, just as the night-wolves did, skulking around in the gloom. He’d even seen the glowing rings of Umbreon as they chased the shadows. But the dark brought him no comfort, and in it, he could no longer see the beauty of the forest.

His own mind was closed off to him, so his days of quiet contemplation brought him no respite. He thought that maybe, if he stared at something long enough, and hard enough, he could make it move, just as the most revered of his kind—the Espeons—did. However, theirs was a gift, one he did not possess.

Finally, winter arrived. With it came the biting winds and powdery snow. Eevee did not like the snow. It turned to slush on his fur and played tricks on his mind, shrouding the land until he no longer recognised it. The forest went quiet and lifeless and there was nothing left to keep him company. He grew hungry, a hungriness he could not cure, for it resided in his heart and not his stomach.

And again, the little Eevee cried.

He tried growing up too fast, but he hadn’t grown at all. Now, like the seeds trapped beneath winter’s shroud, he could never grow until he had what he truly needed. A place where he belonged. And that place was in a little patch of forest where shadows and light danced to the wind’s silver song, carrying the scent of earth-smells and cheri-bush pollen. Safe in the warmth of Mother’s embrace.

Eevee wondered if he would ever see her again. He hoped and prayed. Please. Just one last time.

Spring welcomed him into a familiar land. The sun winked at him through the treetops from a sky of clearest blue, golden fingers cascading down, painting everything they touched with a burst of colour. Lush grass tickled his paws and a cozy breeze stroked his fur. He could hear the zigzagging raccoons, smell the dewy sweetness of new life. It felt as though he had turned back time.

Then, he saw her. And she saw him. Her eyes were coloured like tree sap when the sun shines through it. And they twinkled. Oh, how they twinkled.

A mother’s wish had granted her child’s safe return, and the child was blessed with an answer to his hopes and prayers. The contentment in Eevee’s heart bloomed at last. It was soft and warm like Mother’s creamy fur when she cradled him in her paws.

He could be anything, any time he wanted. But for now, Eevee was happy right where he belonged.

Author's Notes
Other entries from the 2021 SWC!

Seen 3 Hours Ago
Posted 1 Day Ago
71 posts
1.7 Years
2
3 Days Ago at 8:20 AM
Wow, love the amount of detail you presented with the clever use of words! I felt like I was the Eevee, and I was seeing the world through his eyes - I could picturise the whole scene forming around me as I read on!

Also the ending is soo satisfying, this story made my day! Well done bestie!

I much like that the way the elements "reject" him is not only a matter of accommodation or adaptation, that Eevee is well renowned for, but also of understanding that the elements are present in nature in ways both transient and immanent. Water "rejected" him after a single splash and the Electricity from the thunderstorms strikes and puts trees down once; but Ice and winter took the long season to torment him and make him doubt and even his mother's element of Grass was for long unkind to him due to its natural association with Bug, and the maladies that they bring.

Admittedly I did not notice that Sylveon was missing... or perhaps it was not? The Affection that allows an Eevee to evolve into Sylveon was always there in the nest and the cares his mother gave him – and it was *he* who instead journeyed out of home, out of her embrace, to meet the world alone, having no one to give affection to or receive from.