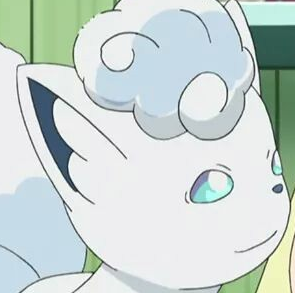 Male
Seen March 15th, 2018
Posted February 23rd, 2018
17 posts
4.5 Years
101
July 1st, 2017 at 5:26 PM
Originally Posted by Sapphirechu [ Original Post ]
So, I'm kinda having a weird issue with this. On the program I have a trainer with Gardevoir and Absol but in the game when I battle the trainer, Absol is Staryu and Gardevoir is Omanyte? All the other 4 pokemon I added are fine it's just those two. I tried changing them but it seems like it's doing that will all the gen 3 pokemon (At least all that I tried)
This happened with me before. Try adding another Pokemon, repointing the trainer, then removing it, then saving. Worked for me. 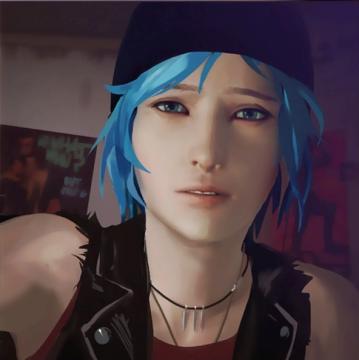 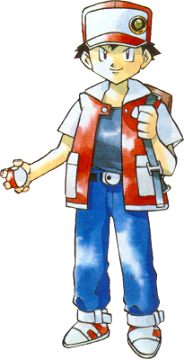 Age 21
Female
Seen July 20th, 2019
Posted August 9th, 2017
9 posts
4.2 Years
104
July 15th, 2017 at 2:35 AM
I downloaded this and I'm not quite sure how to use it. How do I get trainers into the list on the left? And what about the player character's sprites? Will this work with designing those? (I will also need something to design their overworld sprites too.) I'll take whatever help's availible. Thanks in advance!
~ 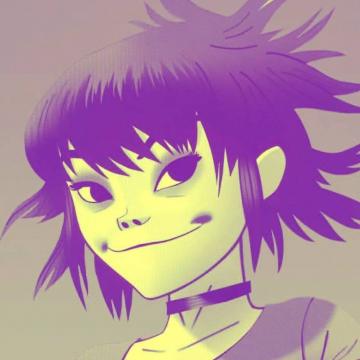 Female
Michigan
Seen June 10th, 2021
Posted October 11th, 2017
7 posts
6.1 Years
105
September 3rd, 2017 at 11:01 AM
Hi! I'm using pokefreak's rombase as my foundation, however, even with editing my ini, I can't seem to get this to work. I can open most other roms(clean emerald, for example) fine, however, it just won't open the rombase i'm using or mrdollsteaks.
I keep getting a popup menu that simply says "There was an error opening the rom"
Is my problem with the ini? I feel like i have all the right numbers.

pokecommunity.com/showthread.php?t=367402 &lt;-- Here's a link to the rombase i am using

USA
Seen October 14th, 2020
Posted April 27th, 2019
36 posts
13.6 Years
106
October 8th, 2017 at 8:42 AM , since edited
Hey this is really neat! Just a question though and I thought this would be an appropriate place to ask, if I were to add more pokemon a trainers party, would I go to the next trainers offset and just add the amount of bytes I added to the previous trainers? Also, I problem I see is that if I add to this list I'm going to eventually run into the pointer sets for pokemons evolution and learnsets if I were to add 6 party teams of pokemons to all trainers/gym leaderes. Would I then have to add/move to those offsets as well or can I just move that whole segment into an empty section? I thought I understood pointers until I wanted to modify them and their data banks lol.

Edit:
Or could I possible use the empty space given and have the pointers point there?! :O! #eurekamaybe! lol

Or do I have to edit the pre-existing code from that trainer? For example: say that I edited the "I like wearing shorts" kid right after you beat brock, I want to replace his generic trainer song to the one I just installed in the game (being 329 "Mystery Connection" in Sappy).

Alternatively, does anyone know any good Trainer Editors with automatic repointing that work with all Gen III ROMS? I used to use Advance Trainer, which was fantastic, but that stopped working. People kept telling me to 'edit the ini' but no version I could download had an ini to edit.

Any help would be much appreciated, it's really frustrating.

Age 22
Male
UK
Seen 2 Weeks Ago
Posted April 15th, 2021
45 posts
3.4 Years
109
March 15th, 2018 at 4:46 AM , since edited
Originally Posted by chris burton [ Original Post ]
Hey apologies if I'm bumping an old thread, but I just can't get this to work. It won't open or recognise any ROM's. Reading the thread other people have had the same problem. Does anyone have *any* help or suggestions.

Alternatively, does anyone know any good Trainer Editors with automatic repointing that work with all Gen III ROMS? I used to use Advance Trainer, which was fantastic, but that stopped working. People kept telling me to 'edit the ini' but no version I could download had an ini to edit.

Any help would be much appreciated, it's really frustrating.
I'm also having a similar problem (Like what people mentioned above I get that error message and can't open ROMs, even if I try opening an unedited Fire Red BPRE ROM with an untouched download of HTE 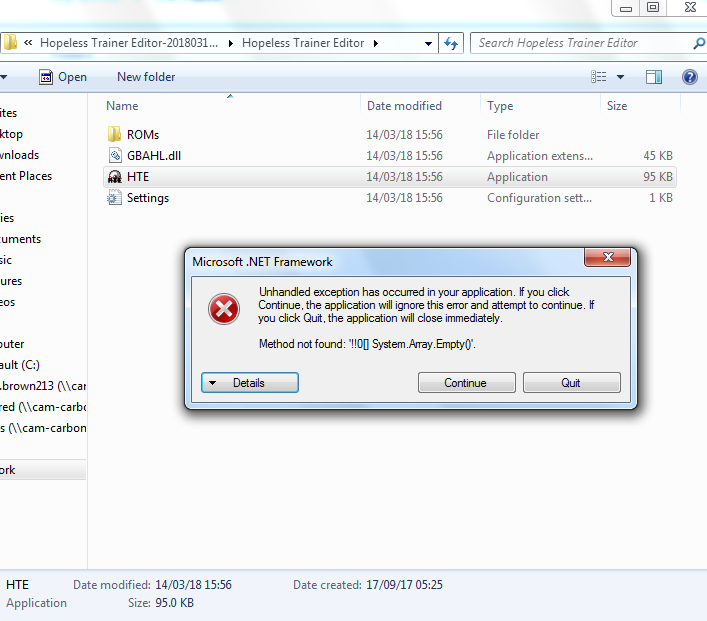 Also when putting a ROM in the folder with the same file name as the .ini file it won't display that message upon opening but it will still say there was an error opening any ROMs
- LibertyJacob99 & LibertyJoel99, creators of Pokemon [???] (when we make the announcement thread it will be linked here) 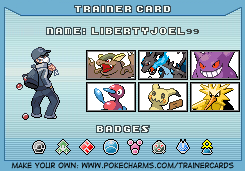 Follow our official Instagram page or join the Discord server for updates and more on the project:
LibertyTwins Instagram (will be active once we've announced the hack / when the hack has started development)
(a Discord link will be here when we make one) 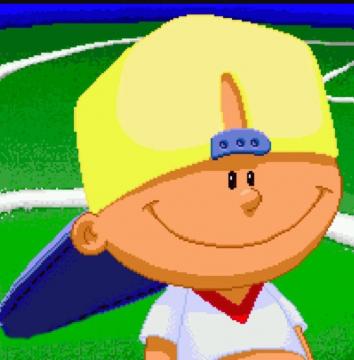 Male
Seen May 28th, 2018
Posted April 4th, 2018
13 posts
4.8 Years
112
March 27th, 2018 at 7:33 PM
Originally Posted by YoY-X [ Original Post ]
Here's a link to UnnamedTrainerEditor, the best one out there. I found it in this reddit post, in the comments.
Downloaded this but gives an error message regarding 'minimum and maximum values' when a rom is loaded.

Also HTE has been giving me the same 'unhandled exception' error that many of you seem to be facing. From what I gather it can be fixed by upgrading .net 4.something...but I have no idea what that means either. Help would be appreciated.

Also HTE has been giving me the same 'unhandled exception' error that many of you seem to be facing. From what I gather it can be fixed by upgrading .net 4.something...but I have no idea what that means either. Help would be appreciated.
https://www.youtube.com/watch?v=uCyQVS-2gCc
here ya go
Old Signature😑
Spoiler:
SOME OF MY OTHER STUFF. 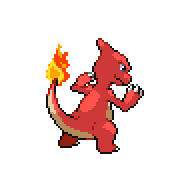 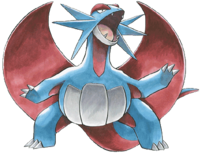 Artist and Streamer | Also a turnip

Female
Seen 1 Day Ago
Posted April 6th, 2021
94 posts
3.3 Years
117
June 10th, 2018 at 3:51 PM
Is there a tool that allows you to add shinies to trainer parties? UTE and other tools on this board all seem to lack a shininess button, but I've seen multiple shinies in Gen III fanhacks. Is there an easy way to do this manually if not with one of these programs?
I stream Pokémon games each week with an engaged chat. Come visit and have some fun!
Twitch Link! We'd love to have you! <3
Twitter Or come get annoyed by me here :B 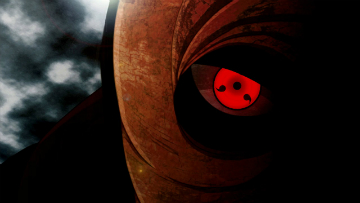 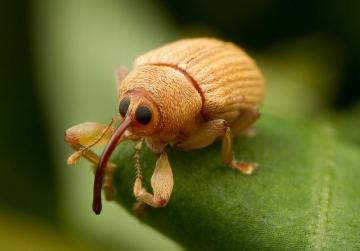 Hello! I'm just going to keep this nice and short: after being disappointed by existing trainer editors, I made my own. I've tested it myself, and I have yet to encounter any problems both in-game and with the tool.

A screenshot of the main interface. v1.0: Available on github.
The program was designed for .NET Framework 4.6.1. If you do not have an updated version it WILL NOT WORK due to incompatibility with older versions of the framework.
This looks amazing! My apologies, but I've downloaded and extracted it, but I don't see how exactly to open it? Is there a special program needed? Thanks much!