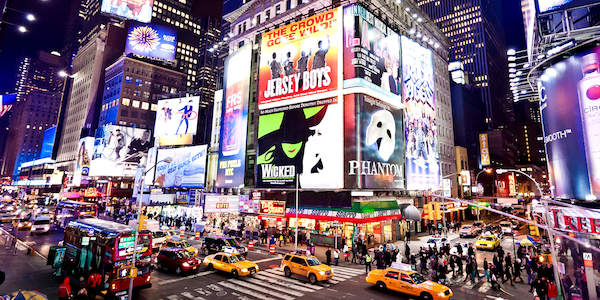 Do you like musicals? If not, why?
What are some of your favorite movie-musicals? [Can be original movie-musicals like La La Land, or adaptations like Les Mis]
Favorite Disney movie musical?
What are some of your favorite standard musicals [West End/Broadway/etc.]
Do you have a favorite composer?
Least favorite composer?
Least favorite musical?
Most overrated musical?
Guilty pleasure musical?
Favorite Broadway/West End divas?
Have you ever been in a musical? If so, which ones, what role did you play, and what was your favorite?
Dream role in a musical?
How do you feel about the lack of original musicals lately?

Age 29
Male
Corneria
Seen 1 Week Ago
Posted October 22nd, 2019
6,432 posts
5.1 Years
2
September 11th, 2018 at 5:20 PM
Ok I'll answer those later but I saw Cats two years ago (in that very place your image is in fact!) and by God it was the most spine-tingling, amazing experience I have ever had when it comes to musicals. Simply amazing performance and when the Memory scene came in...simply wow.
In time I will leave the city.
For now, I will stay alive.
They know that it's almost...
They know that it's almost over.

Long story, no. They are ridiculously cheesy in almost every capacity.

for me:
Do you like musicals? If not, why?
yes

What are some of your favorite movie-musicals?
Moulin Rouge, The Last 5 Years, Into the Woods [I'll never forgive what they did to the second act, but I like it for what it is by itself], MAMMA MIA 1 & 2

Favorite Disney movie musical?
Moana, Mary Poppins, Coco, Frozen, Hercules, to name a few.
IMO The Emperor's New Groove would've been better if it were a musical. (I mean it's already amazing I'm just saying it'd be 110 instead of 100)

What are some of your favorite standard musicals [West End/Broadway/etc.]
My teenaged years were shaped largely by Phantom of the Opera & Wicked. Defying Gravity was really that song for me. It just takes you there. I'm also a huge fan of the following shows [in no particular order]:
Gypsy

Holy cow, how do I even choose a favorite cast recording or production? Each one is so different and fantastic. I love this show so much. I want to play Herbie one day when I'm old. Fav number is probably [url=https://www.youtube.com/watch?v=KK6kt3IQ_p4]Rose's Turn[/youtube]. [Fun fact, my gay ass auditioned for my high school fall musical with this number]

GOD I LOVE THIS SHOW SO MUCH everything is so great about it. The most recent production in London was amazing. The 2011 revival was stellar, too. My favorite song is PROBABLY Could I Leave You?. This song is just perfect. The following scene and then follies afterward are so stellar. This show is such a damn gem.

Into the Woods[indent]I love this show so much. I was so excited for the movie and I wish they'd kept in the Baker's father :c. Favorite song is probably Moments in the Woods tbh.
Company

- I love the original broadway cast recording of this show so much. The music is just PERFECT. I love the 2006 revival, but I'm not a fan of the instrumentals. One of my favorite songs is Side By Side/What Would We Do Without You?

- I love the original broadway cast recording, and the most recent revival in London so much. Angela Lansbury and Imelda Staunton both bring the characters of Mrs. Lovett to life in different ways, and I honestly couldn't pick between them. I'm not a fan of the movie. It's too Hot-Topic-y for me. My favorite songs are probalby A Little Priest or God That's Good!

This is such a great musical, and I love the score. I love the 2010 revival, but with BP instead of CZJ. Her Send in the Clowns is so damn phenomenal

Sunday in the Park with George

The original cast recording is absolutely fantastic. Mandy and BP? Who could ever top them? But let's be real y'all. Jake and Annaleigh did amazingly in the 2017 revival, and it is just as phenomenal. Favorite track is Move On

This show is pretty great. It got super overhyped, but I mean...it's a phenomenal score and when Lin Manuel Miranda does it right [as he usually does] he does it really right. Favorite track is probably Burn or maybe Satisfied

I'm going to answer the rest of the questions later.

I like musicals, I feel that it's a valid medium of storytelling.

What are some of your favorite movie-musicals?

Dream role in a musical?

Female
Sootopolis City
Seen 44 Minutes Ago
Posted 50 Minutes Ago
3,274 posts
3.8 Years
6
September 15th, 2018 at 6:40 AM
An awesome thread! I have loved musicals for years. For now though I will stick with my favorites and not least favorites.

Yes, I do! I love spectacle and magic of being in the dark theater and witnessing the staging. When I hear a great voice live it just makes my heart sing! Its thrilling and fun. Dressing up and going for a night on the town to see a Broadway musical is a really special experience for me.

My favorite movie adaptations would mostly be from the first half of the 20th century! There are a few directors today like Rob Marshall who have some experience working in theater, and I think make decent movies, but many big name diectors on the other hand have said up front that they don't watch musicals, don't even like them and may have not even seen a performance of the source material that they adaptat and frankly it shows.

Of the movie adaptations I overwhelmingly prefer the older Hollywood spectacles. My favorite being My Fair Lady.

There is always room for Audrey Hepburn, and this might be her finest role. She is so sympathetic and just luminous on screen as Eliza Dolittle. She is funny, beautiful, she can dance and move you to tears. Rex Harrison is so wickedly acerbic, Freddie is adorable and sweet and daddy Arthur P. Dolittle is absolutely hilarious, possibly my favorite of the cast.

The music of My Fair Lady is just enchanting, romantic and beautiful. I wish that they could have kept Jeremy Brett's real singing voice, because it is gorgeous, tender and heartbreaking, but I respect how uncompromising they were in getting the sound that they thought was right for the part in those days, and think they did a fair enough job with Audrey's dubbing, she did need more help than Jeremy, and with a touch up by Marni Nixon its a great adaptation.

I love the production design and the costumes by Cecil Beaton, and the wit and elegance and comedic timing, and the idyllic time that they captured. This is Shaw, one of my favorite writers!

I really hope that I get to see My Fair Lady during its Broadway Revival. I am super excited about Lauren Benanti coming to the show after seeing footage of her in A Little Night Music and Into the Woods.

Damn, that's a tough one! I suppose The Hunchback of Notre Dame. Its so dark, gothic and unique with really fleshed-out characters and an operatic score. My mom actually knew Tom Hulce who voiced and sang Quasimodo, they went to art school together. And Tom's voice is so beautiful and warm and clear. He sings the score in such a sensitive way more than any other singer in a Disney movie for me because he was an actor and a singer.

In the movie Esmerald was my hero as a tot. I still think she is the most beautiful woman in Disney that I have ever seen, and she was dark and unusual. She wasn't a princess and didn't become one. She was poor but she was strong and independent passionate and stood up for her friends and worked hard for a living, very brave and she was warm and good. She is free-spirited and special. I have words for anyone who says she was shallow, she wasn't.

Some of my other favorite animated movie musicals are Aladdin and the Prince of Egypt, even though one is Dream Works.


What are some of your favorite standard musicals [West End/Broadway/etc.]

Camelot is my favorite. The music is warm and magical. I especially live Nimue's Follow me.

The characters are so well fleshed-out admist all of the witty lyrics and vocal acrobats and double entendre, its a show that makes you laugh and cry. It is just beautiful, especially how vulnerable and human King Arthur is.

First I have always loved legends and myths am riveted by tales of the knights of the round table, the heroic King Arthur and his beautiful Queen Guinevere and the love triangle with the handsome Lancelot, and the magic of Merlin the Wizard. The musical appeals to the wonder in my inner child, its full of magic, romance and humor, but reflects about relationships and life and our character flaws in a very complex way that I can really appreciate as am adult. Camelot allows us to relate to larger-than-life characters and situations through everyday emotions and losses that we all have experienced. Its a really endearing musical for me.

Some of my other favorite shows are Cinderella, Jane Eyre, Phantom of the Opera and Sweeney Todd.

Rebecca Lukher. Most beautiful voice on Broadway I have ever heard, she is my favorite Christine Daae in The Phantom of the Opera, the timbre of her voice is like a lustrous pearl. She is subtle and natural on stage, she is often in costume dramas, and becomes her character, and graces the stage looking like she just stumbled out of 19th century painting. Its almost haunting. Check out the press reels of her in the Secret Garden.

Dream role in a musical?

Fosca in Passion. She has spent so much of her life in solitude and hasn't really gotten to live. She is reflective and intelligent but underestimated by others, who just see that she is plain and awkward. However, she is full of passion, and though she has experienced loneliness and depression she also has dreams and hopes. She is a true romantic and willing to be brave when she falls in love. She is quite intense and strong. I think this role would also fit my voice better since I'm alto.

Do you have a favorite composer?

Probably Sondheim, such a diversity of characters and situations, and great lyrics and he is really intricate orchestrations under what would seem to be simple, lovely melodies.

I got Haxorus on "What Dragon-Type Pokemon are you?" https://quotev.com/quiz/5077163
Advertiser Content