She / Her
On the road!
Online now
Posted 8 Hours Ago
852 posts
51 Days
1
2 Weeks Ago at 11:59 PM
Hello! Fact Checking Gardevoir here, back on the job! Today, we are on Route 1, Alola, to interview a quite peculiar fellow!
*She points to a mushroom-like being, who is definitely neither of Shiinotic or Amoongus' lines, sitting on a bench. A Cinderace is standing on his left.* 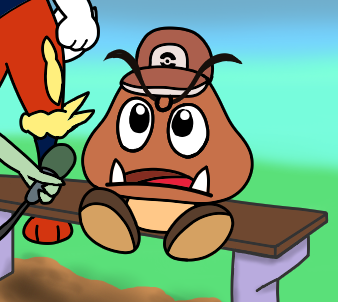 So, Jiggy! Would you like to tell us what is your species ?

"I'm a Goomba. I'm not really a pokémon. Even though to you all, I might look like one."

Can you believe it ? A species, neither human nor pokémon, unknown to all of us until now!
Can you tell us where you came from, Jiggy ? 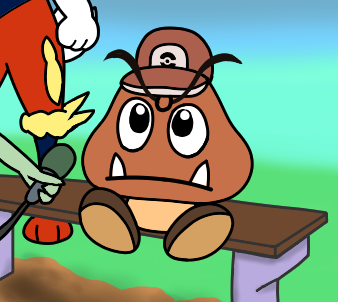 "A castle owned by an evil tyrant called Bowser. It wasn't a really safe place actually. It had lots of boiling hot lava one could accidentally fall in, traps set up, and a prison. I was told he had all that stuff to stop a human called Mario from rescuing a princess
that Bowser loves to kidnap. Now, that doesn't mean I'm also evil. That's all in the past now.
Plus, not all Goomba are bad in my homeworld. This Mario guy is also quite famous in the Mushroom Kingdom. The guy's saved the princess hundreds of times by now. He even has his own castle on an island named after him. And I wasn't surprised to hear that someone tried to take over that at one point. And that someone wasn't Bowser by the way. Mario certainly has a lot of enemies."

Can you tell us more about your world ?

"A place called the Mushroom Kingdom.
It's quite different from this world. Like there are nowhere as many big cities as there is in this world. The environment from my homeworld is also very different like there are many active volcanos, terrain that extends up to above the clouds, and just really diverse types of locations really. There also aren't any pokémon back home, Only a select few creatures in the Mushroom Kingdom have powers and abilities like those of pokémon's. I unfortunately don't have any."

How did you end up landing in our world ?

"All I can remember is that I was first working as one of the minions of Bowser. He is basically "King of the Koopa", which is also a species from my homeworld. One day, I was assigned to scout the more mountainous parts of a grassy area. Suddenly, the ground shook beneath me and a white and black colored "Warp Pipes" appeared nearby.
My curiosity got the best of me and I jumped right in. I fell for like 10 minutes, but when I got to the other end, It was then that I ended up in the Alola region. The humans of this world, at first, thought I was some sort of Pokémon. I had to tell them I wasn't and they believed me really quick actually." 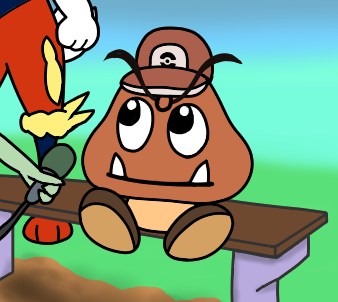 "I assume there is not really a way back to my home world, but I really like it here. Even though it doesn't have any familiar set pieces from the Mushroom Kingdom, I still wish to make this my new home now.
Bowser probably wouldn't know since he already has like thousands of Goomba troops like me."

What have you been doing since then ?

"At first, I thought of getting a job at a greenhouse somewhere in the land of Alola. But it was soon after that I realised having these way more powerful creatures called pokémon at my side that I instead became a pokémon trainer." 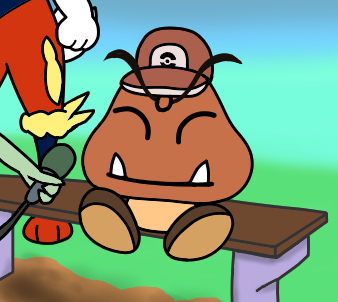 "I met my trusty partner, Cinderace, as a Scorbunny when I was visiting Galar. He had taken a liking towards me when I was hanging around in Hammerlocke, and Scorbunny, along with two other pokémon, were walking by with Professor Sonia. I'm still not entirely sure why he likes me so much... Probably because it's really social in general."

I'm glad to see you are a good person and that you have found trust, acceptance and friendship in our world! We all wish you the best for your future among us.
And that's it for today, everyone! See you next time, same hour, for our next adventure!
*✧･ﾟ:* interview with gardevoir *:･ﾟ✧*
pairs ⋆ credit ⋆