There can only be one...

Legends of the Arena is a fan-made Pokémon game, created using the Essentials Kit for RPG Maker XP. I posted on the Beginner's Showcase back in the early days, but since then I've made significant developments which I felt warranted a separate post. The motivations behind this project were to develop an unconventional Pokémon experience. I was growing tired of the lack of originality present in both official and some fan-made games – they seemed to follow the formula of collecting eight gym badges, defeating the Bad Guys, capturing a legendary and becoming the Pokémon League Champion. It works but often seems lazy, so I wanted to do something different.

Five years ago the land of Aria was on the brink of a Civil War. A man fighting for a supposedly just cause had divided the population, with some prepared to risk their lives for a greater cause, while others were determined to maintain peace. The cause of this conflict? The International Pokémon Championships.

A tradition for almost thirty years, the IPCs are the most prestigious and widely-known competition for a trainer to prove his worth. Their purpose is to allow anyone the chance for success, for fame, fortune, and honour. Trainers from across the globe come to participate in the annual tradition. Stars have risen and fallen solely on their reputation as a competitive trainer. Yet the IPC's tolerant attitude to its participants was a double-edged sword, as they learnt with the troublesome Bryce, and only through luck did the country avoid societal collapse.

Flash forward five years, and an ambitious young man is applying for the championships with his brother. The Plazadown Qualifiers are imminent, and he's decided to try his luck. He knows it'll be challenging, but it's a challenge he's willing to take, and along with the support of his brother nothing can stop them.

You: You assume the role of the nameable protagonist, who enters the qualifiers in Plazadown City. He talks, is relatively sarcastic and cynical but has a strong bond with his brother.

Max: Your best friend, he's still somewhat naïve, but certainly doesn't lack spirit and enthusiasm. If not for Max you probably wouldn't care about taking part in the IPCs but his encouragement has given you some degree of ambition.

Laura: A fellow contestant, she seems refreshingly blunt in comparison to many other individuals you encounter on your journey. With an interesting past, she seems like one to keep an eye on.

Gabriel: The eccentric host of the competition, it's rare that you'll ever find him wearing something else besides bright purple. Still reasonably new to the process, he still hasn't quite hit his stride, but will provide to be invaluable when it comes to working out the ins and outs of the competition.

Your Fellow Contestants: A range of characters, these contestants will be sharing your journey with you. Some you'll like, some not so much, but you'll undoubtedly have your life changed by their input.

Shadow Master Bryce: A mysterious character, he appeared some years ago as one of the most promising talents on the battling scene, but soon tarnished that reputation by attempting to lead an uprising against the Capitol by establishing the Cult of Shadow. Cast out in exile, his fate is unknown, although there have been reports that he has been seen recently.

Dragon Master Aemon: Bryce's famous adversary, he is the most famous participant of the IPCs, with at least five wins to his name. He retired following the Bryce incident and now lives a life of luxury on his estate. 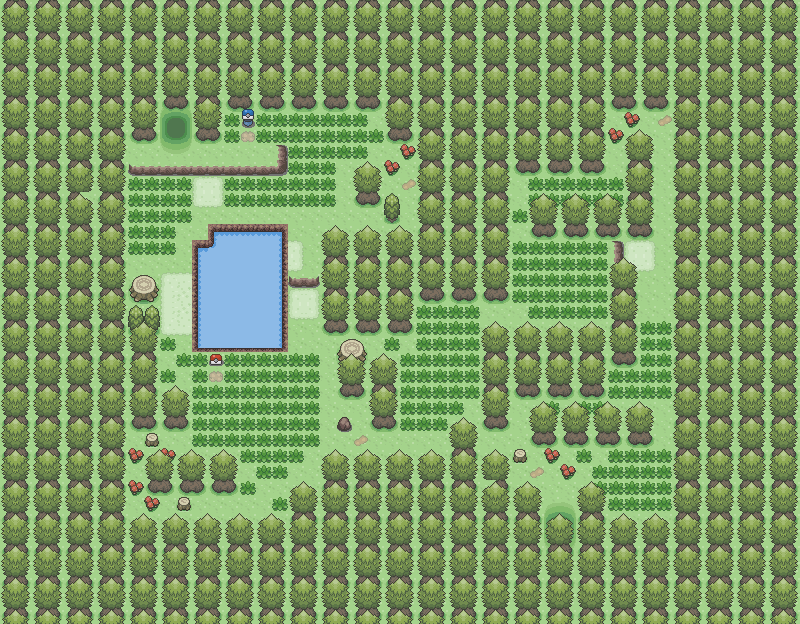 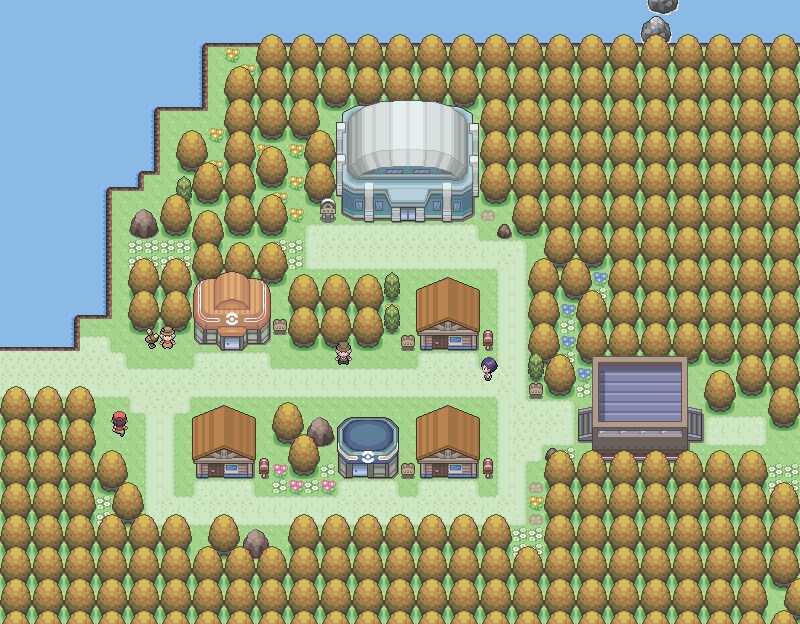 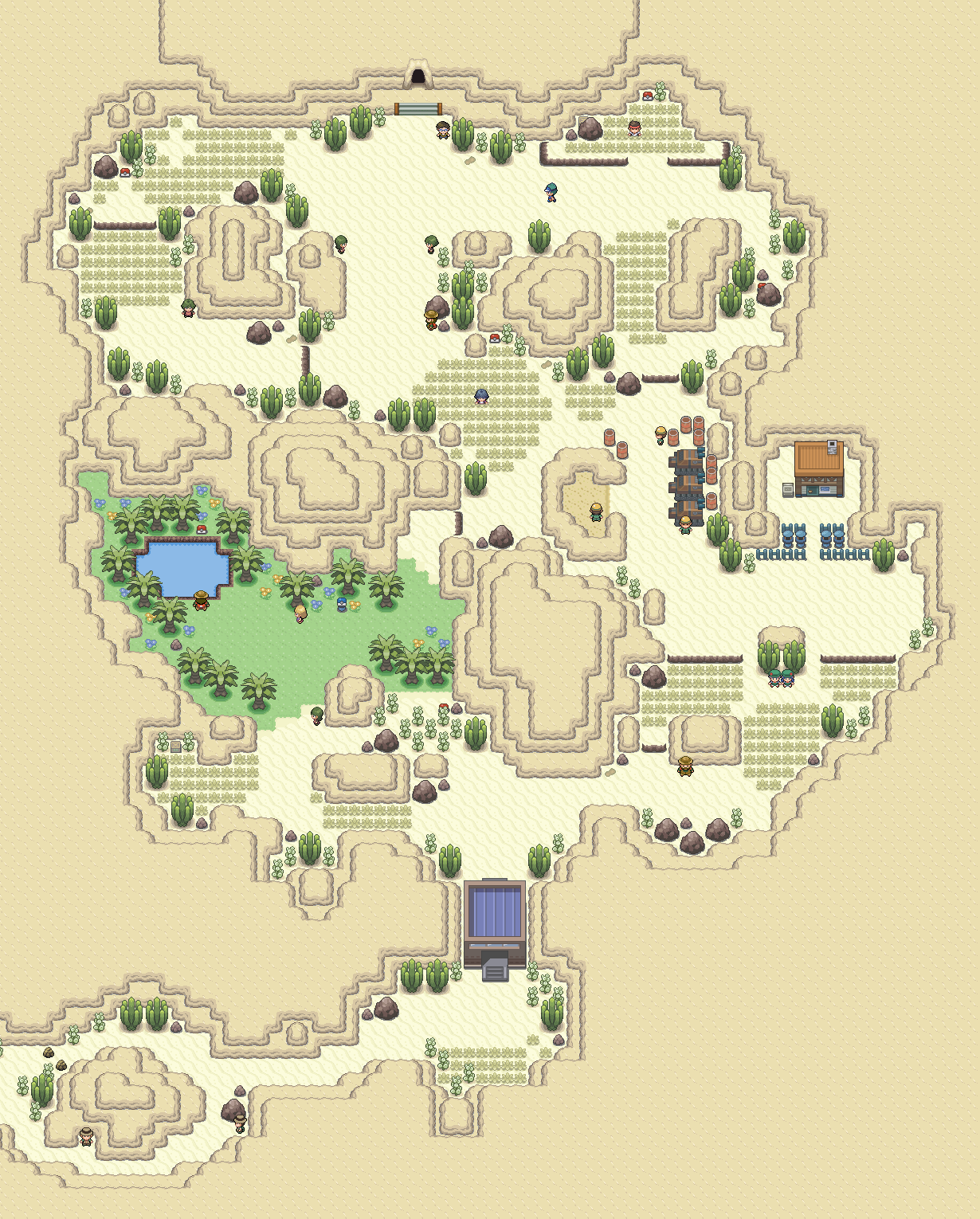 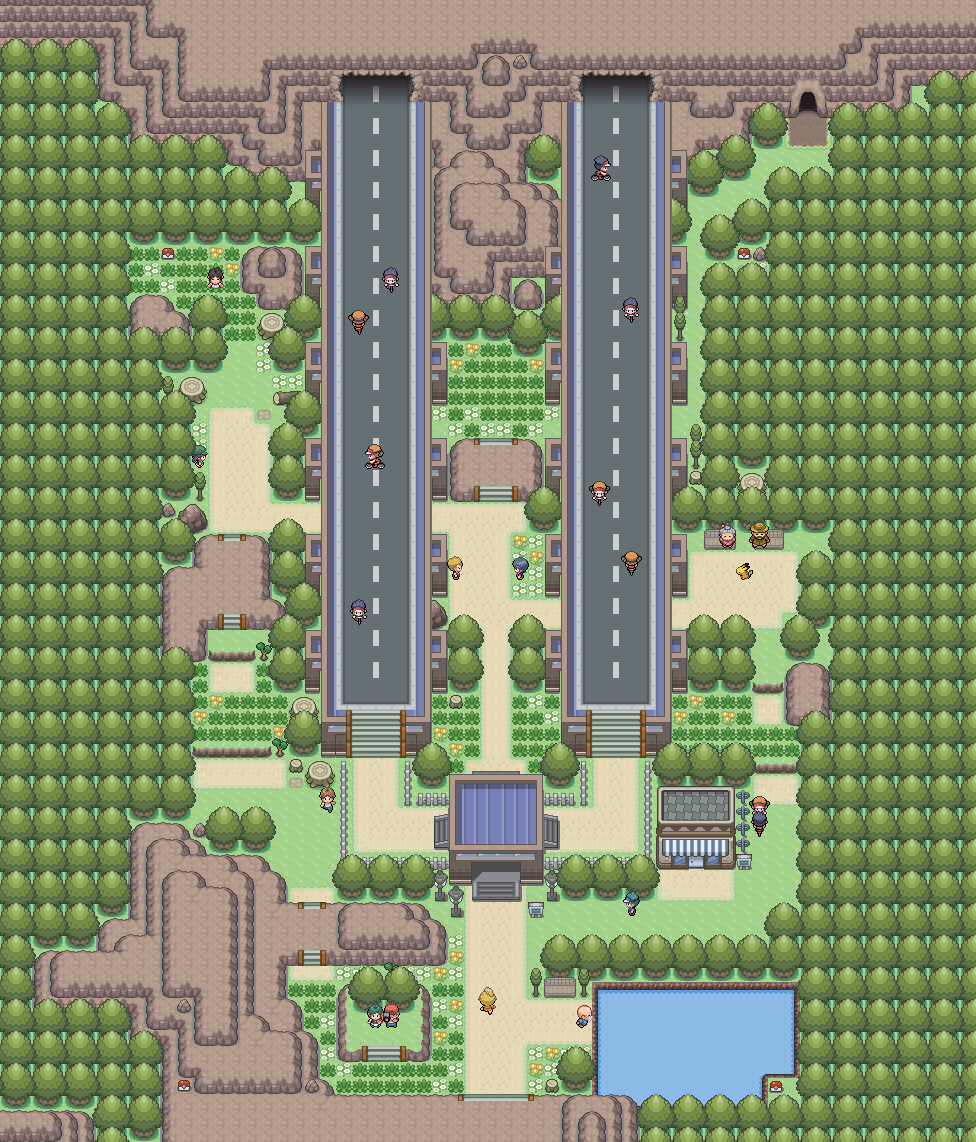 This game essentially mixes some of the best elements of Pokémon Colosseum and the core games, as it allows the player to traverse wild grass and routes – but instead of gyms there are championship battles, similar to that of Colosseum. Yet don't make the mistake of thinking this is all borrowed from the actual Pokémon games, as Legends of the Arena takes on a more traditional RPG structure, with chapters and unique storylines and side quests exclusive to a particular area.

The chapters will be as follows;

Other notable features include;
Progress

LEGENDS OF THE ARENA V1.1

Guide on how to play on Mac

I should give credit to the following people;

If I've forgotten anyone then please don't hesitate to tell me. Thanks for reading, and stay tuned for future updates! 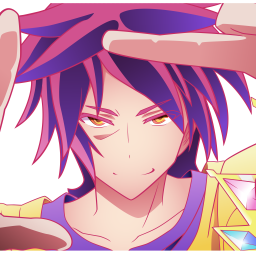 Age 26
Male
Australia
Seen August 18th, 2019
Posted February 19th, 2019
63 posts
9.9 Years
5
March 26th, 2013 at 7:30 PM
This looks interesting. Very unique from the standard games.
The tiles that you are using for the outer areas: forest and such, look great, but I do have to say that I have never been a fan of the city tiles your using. They just look dull to me.
Other than that small, selfish opinion, great game! Cannot wait to see it in action.
Pokemon Freedom
A new 3D experience coming soon.

Male
England
Seen March 10th, 2019
Posted August 14th, 2015
124 posts
9.5 Years
6
March 26th, 2013 at 11:44 PM , since edited
Originally Posted by Dradier234 [ Original Post ]
This looks very good! I'm suprised only one person posted here yet! This looks very promising, good story line! I like how its unique and different from the other pokemon games.
Thanks! I was worried I didn't write in enough details for the storyline, as I purposefully refrained from describing some of the twists which happen along the way. In particular, there's a twist fairly early on which changes the dynamic of the game, but I'd rather let the player experience that themselves.

Age 25
Male
everywhere
Seen 1 Week Ago
Posted January 10th, 2016
1,118 posts
9.3 Years
9
April 13th, 2013 at 8:53 AM
Originally Posted by WackyTurtle [ Original Post ]
Just for the record, this isn't a hack, it's made using RPG Maker XP. And while I appreciate the sentiment, completion is still a little way off, although a demo should be coming out soon-ish.
a demo is coming out soon? sounds awesome! I'll definitely try it out when it does. 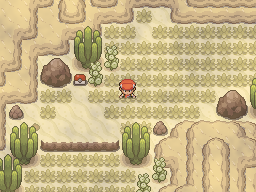 Here are some screenshots of Chapter 4. A demo will be released once I have completed the routes leading up to Chapter 5. 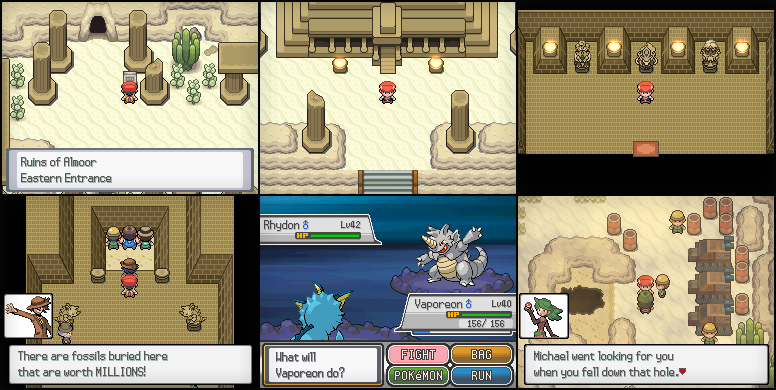 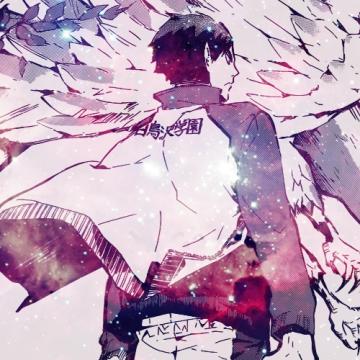 Male
Seen April 19th, 2019
Posted September 12th, 2018
8 posts
6.9 Years
14
August 8th, 2013 at 9:42 PM
Looks pretty decent but the concept [basically the hunger games] seems uninspired, you should probably try and get a better looking battle system than the one essentials has.

Male
England
Seen March 10th, 2019
Posted August 14th, 2015
124 posts
9.5 Years
15
August 9th, 2013 at 12:55 AM
Originally Posted by Ryokan [ Original Post ]
Looks pretty decent but the concept [basically the hunger games] seems uninspired, you should probably try and get a better looking battle system than the one essentials has.
I see what you mean about similarities to the Hunger Games, but I wouldn't call it uninspired. The tournament structure where a trainer is knocked out each round simply serves as the framing device for the story, where the player travels around the region with some interesting characters and attempts to stop a cult. It's more original than the typical "beat every gym then the elite four" which is the structure of most existing fan games.

Also regarding graphics, I see too many games focus too much on graphics and not enough on actual gameplay, so I'd rather finish the bulk of the work of my game, then work on making it look good afterwards (which can be done any time).

Male
England
Seen March 10th, 2019
Posted August 14th, 2015
124 posts
9.5 Years
17
September 19th, 2013 at 1:41 AM
Originally Posted by arktyz [ Original Post ]
is this rpg maker or are you using advance map for your tiles? it looks amazing btw just wondering how you insert those amazing tiles and stuff :)
RPG Maker XP. And those tiles are largely a mixture of Kyledove, Chimcharsfireworkd and my own tiles.

Male
England
Seen March 10th, 2019
Posted August 14th, 2015
124 posts
9.5 Years
18
February 1st, 2014 at 10:38 AM
Not sure about the rules about reviving old threads, but a demo will be available once I've worked out an error with the latest version of Essentials (SpriteWindow problems keep popping up). I might revert to an earlier version of the engine just so I can release something. In the meantime, here are the latest screenshots of the routes at the end of Chapter 4. 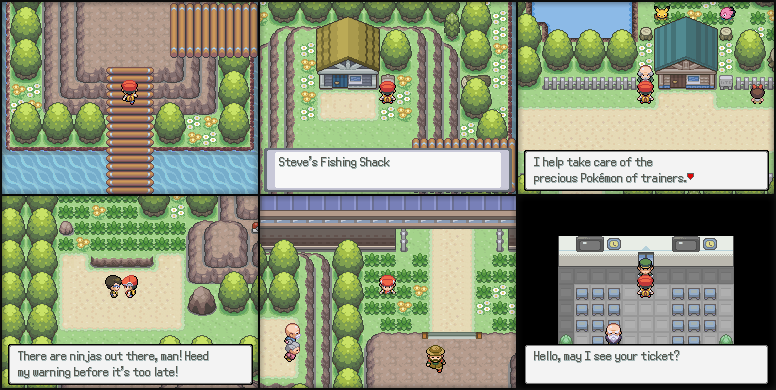 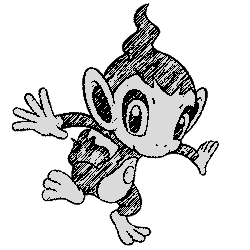 That said, it's great how you're choosing to balance gameplay with graphics in terms of demo progression. As for a bit of troubleshooting: Initially, there was an error saying RGSS104E.dll was missing, but that was easily remedied with a quick google search & download.

Edit: Wow that opening scene was nerve wracking. Definite recommendation, in case any of you are (still!?) iffy about giving Legends of the Arena a try.

Edit x 2: Damn onion cutting ninjas. ;A; I tried loading up the game again to see if I avoid the battle altogether but nope, didn't work. Downers all around. WHY IS THIS HAPPENING TO ME, I'VE MADE MY MISTAKES