Male
High above you
Seen 3 Days Ago
Posted September 2nd, 2021
319 posts
9.9 Years
1
February 20th, 2014 at 3:46 AM , since edited
Introduction:
This is a Hack of Pokemon FireRed US.
Hey, I'm AmazingCharizard aka RocketLeader(best name ever btw since it's true :) )and this is my first attempt at Pokemon Rom hacking. So please have this in mind as you play this hack that I've tried my best since the idea of being a member of Team Rocket has always fascinated me.
I'm still waiting for Game Freak to hire me and grant you to give you what probably everyone of us wants to do. But since I'll need to get my degree at university first I'm on my own for now...

So what're the differences to Pokemon FireRed? Here's a little list:
-Play on the side of Team Rocket!
-Catch over 380 Pokemon, most of them catchable before the Pokemon League!
-Slight evolution changes for a few Pokemon: For example, Trapinch evolves at Level 30 instead of 35, but Vibrava will evolve at level 50.
-Relive Kanto as it should've been(at least for me)with new areas to explore and new challenges awaiting you!
-BW-Pokemon-Sprites!
-Gen 4 & 5 Pokemon!
-Pokemon which acquired special circumstances to evolve(like trading or happiness) will evolve more easily through level up(or evolution stones).
-Much humor and many references to real life happenings and characters! Some may like it, some won't, that's only up to you.
-Your adventure is far from over after the Pokemon League!
-The story has been noticably changed(isn't that obvious anyway?)!
-Difficulty has been increased as I think that the original FireRed(and by the way most of the Pokemon games are way too easy)lacks difficulty!
-Meet familar faces from other Pokemon games who'll be either friend or foe(rather foe, better than if it was the opposite, right?)!

Very important: Read this before you play!
-Make sure to get the National Pokedex or most of your Pokemon won't evolve! You get the National Pokedex pretty early in the beginning.
-Some road blocks will ony vanish if you got the right badge! For example the policeman at Route 107 will only disappear if you got 2 badges(Sometimes you need to leave and come back.
-Talk to everyone. Seriously, even if you don't like to hear(read) what Youngster Joey has to say about his Rattata, listen to the people. I hope you won't regret this.
-Open your eyes.Pokemon is about discovering on your own. When you've spent at least a month and you still can't progress then feel free to post your problem here.

After the main story: If you want to continue you need to have captured at least 60 Pokemon! and then talk to you-will-know-who. It doesn't matter if they're originally from Kanto or from other regions!

FAQ & Walkthrough: Check out these links, it may help you when you got a question or can't progress further:
http://www.vizzed.com/boards/thread.php?id=72130

Spoiler:
So it seems like a few people are struggling with certain events. Although I'd like you to think more and explore, I can at least give you a few hints

Q: F*** this, I can't get the card key, the dome fossil causes a purple screen, I can't progress in the Safari Zone!
A: These annoying bugs were fixed long ago. So if you haven't read the description you probably don't have the current update here. Refer to Triune's thread, he posted the way to update the game. Reading always helps(also my personal motto)!
Q : I can't get SURF!
A:You can obtain Surf if you got a certain amount of GYM badges at the same place you get it in Firered.
Q : Why does this Pokemon sound like that Pokemon?
A:Because I'm unable to insert new cries. The new Pokemon have the cries of the old Pokemon...
Q : Where can you get the VS-Sekker?
A:I removed it since there 1)lot's of trainers and Pokemon to fight and 2)personally, I don't see it as essential anyway.
Q:Are there any bugs in this great game?
A: First, thanks for the compliment As far as I know, there should't be any game breaking bugs.
Apart from this, there are some text overlaps and not disappearing text boxes but they don't affect gameplay.
Q: Why is my rival May instead of Gary?
A: Without spoiling too much, I assure you that you meet Gary fricking Oak later in the game. I was just unable to replace Gary's sprite in the intro with May's.
Q:Why do my Pokemon (like Houndour) not evolve?
A:You don't have the National Pokedex. You can get it pretty early in the game when you head to Vertania Forest.
Q:Which new Pokemon did you include in Rocket Strike?
A:I'll only name a few: Electivire, Honchcrow, Shieldon, Cocnodon, Magmortar and some more!
Q:Which evolutions were changed?
A:I changed evolutions for some Pokemon. Pokemon which required trading(like Graveler)or happyness(like Golbat)will evolve by level up or by a special stone(for example: Feebas). A few Pokemon like Houndour and Ekans will need a few more levels to evolve.
Q:I noticed a bug/I got a question up my mind. Where can I ask?
A: Post it in the comments section or if it's urgent write me a private message, I'll try to help you as good I can.

UPDATE: So, for those people who couldn't or didn't want to to play using Vizzed, I've uploaded an IPS-patch. Download this patch and use it on a clean Firered 1.0 rom (which you have to get yourself of course). If you've played on Vizzed and still would like to do so, you still can. Happy playing, guys & girls!
http://www6.zippyshare.com/v/er0WDvZB/file.html


Screenshots:: You find a few in the Attachments and in the spoiler. I don't want to spoil too much so the screenshots hopefully won't tell you that much about the plot itself. 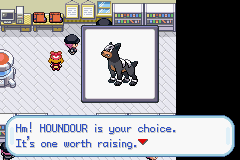 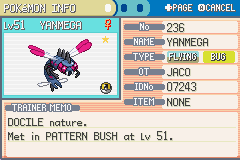 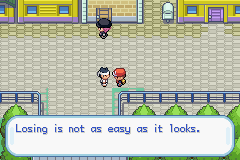 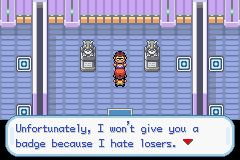 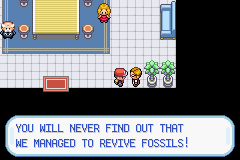 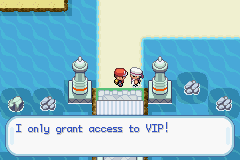 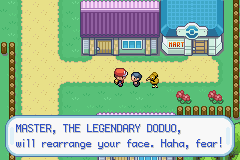 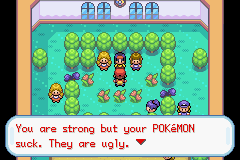 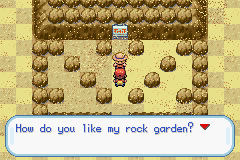 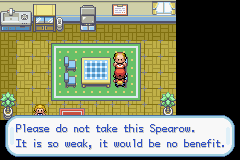 Update: Here are (probably) all changed evolutions, just in case you need them.


Credits:
- Nintendo & Game Freak of course...
- Chaos Rush - For BW-Sprites
- Physx - for Sprites
- Lu-Ho,HackMew,... - For Tools like AdvancedMap, A-Trainer and more
- Pokecommunity Hack's showcase - For getting me excited about Pokemon hacks in the first place
- earthwarrior, locksmitharmy, PinkishPurple - Tutorials
- \Nate(I hope I wrote it right) - Rom Base

Update: For those wondering why I uploaded an IPS patch after all this time - Because Vizzed was sued by Nintendo, people who didn't play it until now can't download and play the game through Vizzed. If you played on Vizzed before and didn't remove anything then you should still be able to play Rocket Strike as usual.
This hack was mainly created because of a Rom Hacking competition(which is the reason I can't post an IPS-File so I rushed some things, I guess. There're probably some little errors like text not disappearing but I hope you'll look at the total package...and deal with it. :D
So if you like my work I'd kindly ask you to recommend this game to your friends and rate this so I'll get famous...I mean, so that Team Rocket will rule all over the world.
Prepare for an epic adventure.
And if you get stuck you may post it here, I hope that I can assist if you need help.
Thank you for your attention!
Yours truly,
Me
Check out my hack "Pokemon Rocket Strike" http://www.pokecommunity.com/showthread.php?t=319844 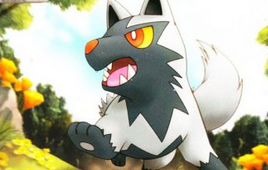 Will my hack be done soon? Probably not.

Quick note, I ended up losing the IPS files for ALL my hacks in the Sideshow Showcase, I ended up factory resetting my PC before making backups. Since you can't download them because the downloads are broken, and I no longer have access to them, well, you can figure out the rest -.-

Seen November 22nd, 2016
Posted September 29th, 2016
141 posts
14.9 Years
4
February 21st, 2014 at 5:09 AM
this looks great i would have played it but its on vizzed.com i dont have internet connection at my home too bad u have to give ips patch of this hack.in pokecommunity we wont go online to play hacks trust me if u upload ips file it will have lots of players so pls upload an ips file

Male
High above you
Seen 3 Days Ago
Posted September 2nd, 2021
319 posts
9.9 Years
5
February 21st, 2014 at 6:55 AM
I apologize but I'm afraid I can't upload an IPS/UPS file as it's against the rules of the competition(which I mentioned above). I hope you'll play it though :)
Check out my hack "Pokemon Rocket Strike" http://www.pokecommunity.com/showthread.php?t=319844

Friends Till The End

4. done just play it with a gba emulator

4. done just play it with a gba emulator

(if don't have the programs,The Rom google it, Cause Sharing Roms is Against The Forum Rules or how to patch roms there are alot of tutorials on youtube)
[NOTICE When rom patching Always make sure you have The Right Region (Ex.Pokemon Ruby USA) ]
[2nd NOTICE : if Some Rom Patches Appear to be in a Rar Folder like this (Ex.DR2.rar) You Need Extract the File with Programs Similar like Winrar (Windows) or The Unarchiver (Mac) ]
Did you even read the first post before copy paste this there is no Download...

This hack looks so funny and good for a rushed game who was made for a competition it would be so much better to see it made as a normal hack and like the others said can we get the download when the competition is over?

Male
High above you
Seen 3 Days Ago
Posted September 2nd, 2021
319 posts
9.9 Years
14
March 1st, 2014 at 9:16 AM
Hehe, I'm not that excited about that lol...
Unfortunately, I'm not allowed to post the download.
However, I think of "remaking" it and then release it for you to download(actually you can play it on mobile/tab/whatever, I'm not just gonna tell you that :P ), if I got some more free time and survive my exams
Check out my hack "Pokemon Rocket Strike" http://www.pokecommunity.com/showthread.php?t=319844

This actually applies to any game available in the RGR. ;)

Thanks, that means a lot...well, it is a ROM hack ;)
(I just noticed your rom bases, they're pretty good, buddy :) )
Check out my hack "Pokemon Rocket Strike" http://www.pokecommunity.com/showthread.php?t=319844

Because people don't ask how to patch the game.
ROM hacking FAQ - Read before asking how to play a hack.

@V.V. if you wanna see larger screenies...why don't you play the game? ;)
Check out my hack "Pokemon Rocket Strike" http://www.pokecommunity.com/showthread.php?t=319844