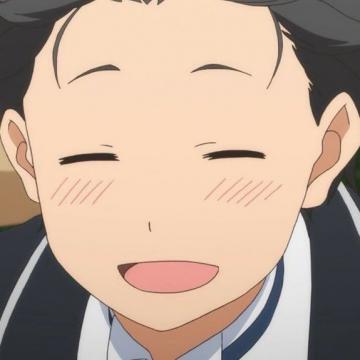 >>Discord Link<<
About
This project is about taking an old text-based forum RPG and converting it into an automated game that will be playable on Discord. The purpose of choosing this medium is to create the ideal hybrid between a Roleplaying game and an Automated game. The system would give players the option of roleplaying and crafting a story along with their adventure as desired, while giving others who just want to play the game and be the best the ability to do so without repercussions for not roleplaying. The general idea is to use a Discord bot to enable basic things like travelling, finding wild pokemon, battling trainers, starting quests, etc. Your individual channel would allow you to play till your heart's content, and take on the New Logora Gym Challenge in any order desired. Location based channels would enable you to get in character and interact with other characters in the same location, even participating in roleplaying-based quests with them! We envision time-specific events occurring as well, which will give players the chance to participate in action-filled independent or team-based endeavors following the grand storyline.

Development Kit: None; game is being custom built in Node.JS - See Super Nerds role below for more info.
Features
Recruiting Positions
Super Nerds - Currently NOT recruiting: 5/5 Positions Filled
- This is the programming team. Currently there are 5 people on this team. For sake of ease with collaboration, we are no longer accepting new developers at the moment. I will post an update if this changes We are developing in GitHub using predominantly Node.JS with the Discord.JS library, the mongoose ODM for querying to the MongoDB database with player/pokemon info, and lastly we are using a React framework for a webapp which will display player profile info, among other game-related details. We are adapting the open source Pokémon Showdown battlesimulator, which involves converting Typescript algorithms to Javascript and replacing pokemon/ability/item references with calls to our database objects.

Artists - Currently recruiting: 2/7 Positions Filled
- This team will be responsible for developing images needed for the game. This includes battle backgrounds, pseudosprite shrinking (our sprite style consists of shrinking down sugimori art to 100x100 frames and touching up the outline), status icons, NPC/Gym Leader/E4 trainer art, and more to be decided. This team will collaborate with the Super Nerds on user interface decisions. We will eventually open up work on integrating other regions/fakemon into the bot, so artists who are interested in creating in an environment where their creations can come to life are welcome to inquire about joining the team as well!

PokéManiacs - Currently recruiting: 5/7 Positions Filled
- This team will be responsible for leading discussions and finalizing decisions related to dex updates and relaying changes to the Super Nerds. The initial primary goal would be the large task of updating the TurquoiseDex to be Gen VIII friendly (it is currently in Gen VI meta). This includes deciding what Gen VII and Gen VIII Pokémon would be good fits for the region, and revamping movesets, abilities, and items.

Storytellers - Currently recruiting: 6/7 Positions Filled
- This team will be responsible for creating new sidequests, flavor text for locations and moves to be loaded into the bot, and importing/reviewing details from the archived forums to the discord server. Post-game release, these members may have the option to get involved with minor or major event writing.
Teaser
New Logora is fairly quiet as most regions go these days—there are no evil teams threatening to snatch Pokémon away, the world is not in danger, the biggest thing going on is the start of a busy new trainers' season and the preparations for gubernatorial elections. Everything is peaceful, or as peaceful as modern life ever gets, anyway, and no one can complain because things could certainly be worse...

...but, according to some of the Tanoby, the descendants of the ancient civilization that once thrived in this part of the world, they could also be better. Long ago Logora was home to legendary Pokémon whose very presence granted the region bounty, prosperity and power. The legendaries have long since been lost to time after the events that led up to the Exodus, but a small group of remaining Tanoby mystics who call themselves the Revivalists are looking to return them to their former glory. There have been so few clues over the centuries, so much time and effort and research that seems to have amounted to nothing, but at long, long last they believe they've found something—the first hints at what might just be the key to restoring the legendary Pokémon to their rightful places...

*Ahem*..."Is this thing on...?" - ~tap tap~ ... *AHEM*
My name is Gadari. Nice to meet you! No, none of that "Professor Gadari" nonsense; I'm no professor. As a matter of fact I used to be a trainer of quite some renown, but now that I'm retired I help new trainers like you get started by handing out these Pokédexes and special starter Pokémon. That's why you're here, correct? Wonderful. Just tell me a little about yourself and I'll get your equipment and your new partner ready to go!

Here are the Pokémon I have available. Choose wisely—this little fellow will likely become your Pokémon partner for life! (If you need to know a little more about your options, why not try out that new Pokédex and see what it says?)

Screenshots
These three screenshots are of some commands that have been in the works for enabling basic game aspects. They are very much works in progress at the moment: 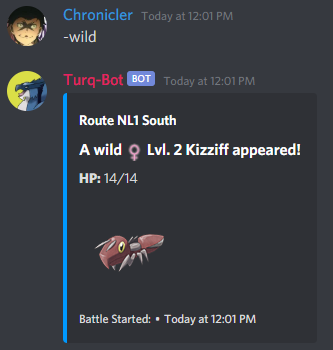 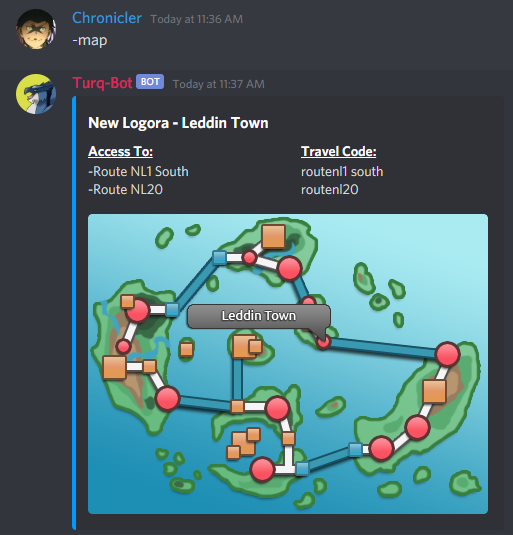 This screenshot is a proposed battle template style at the moment, using X/Y backgrounds. Eventually we'd like to have custom location backgrounds and custom status bars as well. This sort of interface would replace the simplified version in the first screenshot with the wild Kizziff. 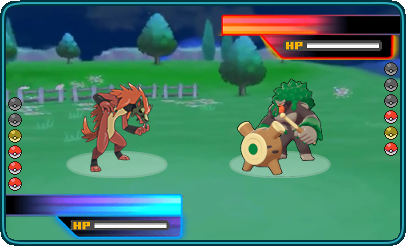 Anyways, that's all I have for now. If you are interested in helping in one of the roles mentioned above, simply reply and/or private message me here, or join the Pokémon Turquoise Discord and follow the instructions in the latest announcement. Our current Discord itself isn't very active at the moment, as most of the coding and testing is being done on another server where the game will be played. So please don't let it deter you if you are interested in helping, I can assure you that the project is alive and actively being worked on. Thank you for taking the time to review our proposal, and we hope that even if you can't help currently, you check out and enjoy the game when it is finally released! ^_^

While the development team has been at work for a month and a half already, we are ironing out tasklists for the other teams at the moment, and will be working on task delegation and kickoff meetings for the other groups pretty soon. Act quickly if you are interested in joining these teams before work kicks off, but also feel free to come back at a later time if you are interested and don't mind having to do a little bit of catch-up homework. 🙂