Male
Ill never tell.
Seen 1 Day Ago
Posted 1 Day Ago
893 posts
9.2 Years
1
February 28th, 2021 at 3:40 PM , since edited
Anyone who looks through the videogames section knows about Gamer's Obscurea; a list of game's noone has heard about or bother's looking into because everything else outshines it... but in a very annoying and increased margin. We have a section for anime, but not one for general cartoons or comic's. Which sorry to the admin's, but I'm combining both into this one as we already have a section for Anime.

The criteria here, in the same essence, is to post about show's or comic's never touched on or seen before that have some value worth watching and reading in today's world. Such as Duck Man or an off-brand comic called Bunny-Vampire Hunter.... Which the latter was a thing; Found the comic in a comic book box at flea market once, but can no longer remember the name for the life of me. comic was about this furry-anthropod-rabbit. Wore dark clothes and a trench coat and hunted vampire's with a literal 'bat' side-kick; it was a crude comic, but it was published, had an author and interesting choice of art style; though it tears my mind apart trying to find the thing. The comic ran for about 2-3 issues and I can't find the name of the thing anymore. it's in one of the comic databases, though beyond that, it's just as vague now as it was when it was documented. If anyone with more time on their hands can find the issue,I'd be happy to have it as to give me peace of mind.

Moving on; starting this post with something not many folks ever bothered looking into... 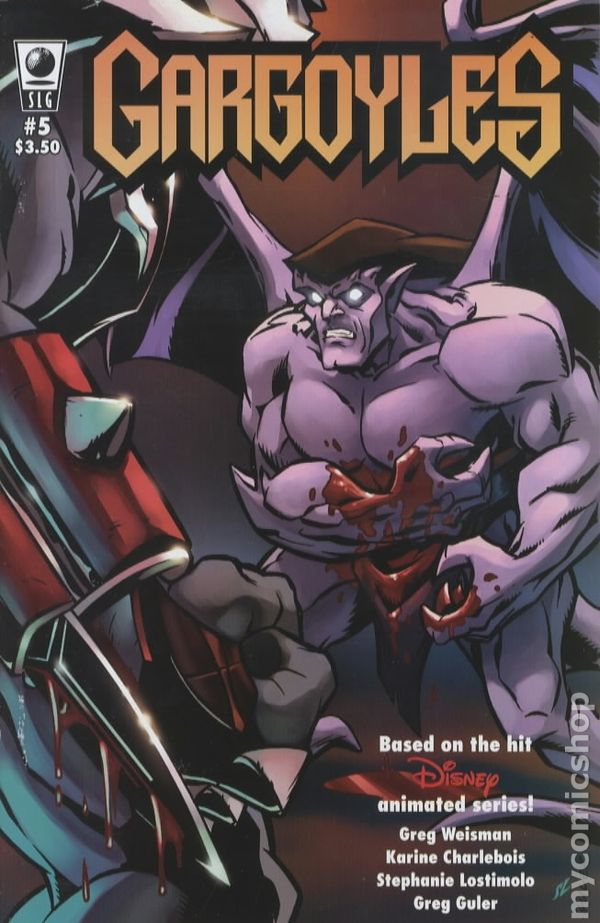 Gargoyle's - Comic Book Series
Everyone remember Gargoyle's, if you don't, then it's a series Disney needs to research and reboot if they ever get back on their feet properly and listen to the internet. Gargoyle's was a Gothic, animated Fantasy Epic produced by Disney! Disney of all companies to go from funding the light-hearted comedy and family friendly cartoons to Grim and Gothic with Fantasy combined with Science Fiction in this strange combination. The story to it is interesting; as it center's around a small clan of Gargoyle's, spared from their doom of being smashed to bit's though cursed to remain in their Daily Stone Sleep until their castle rise's above the clouds. A sh*t ton of year's later, a billionaire, bored to death comeas across this story after bidding on a grimoire in an auction and purchases the castle, statues and move's everything brick by brick to be built into one of his sky scraper's. Thus, the rest is history, the Gargoyle's awaken from their 1,000 year cursed sleep to find they are no longer in the land of steel and stone, but the land of technology, lights, television and guns. The world of magic is far extinct and they're in a world they have to adapt too with some older thing's following in their wake. The billionaire using them for coporate sabotage, which they don't understand until they do, leaving their home to find a new place to roost in case he get's any funny ideas about killing them in the daylight. Immortals coming along to hunt mythical beings because of an ancient prophecy and curse as he and his prey are pawn's in an uglier game of chess and manipulation- It's just a beautiful series, under the control of the mouse who doesn't know what he's doing or how he'll survive with his copmpany.

The cartoon ran for a good 3 seasons; 4 if you want to get technical though by season 4, the show dropped it's serialization and went the route of variety show and comedy with it's already gothic theme and it was terrible. After season 4 bombed; they had comic produced to finish up the story in the 'Clan Building' saga. Which was a short lived run, but it's done well; after this though, the series is kinda dead with die-hard fans more left in a state of limbo. The creator WANTS to do a continuation, not a reboot, of the series itself. If you got time and don't mind a little piracy as the physical copy of the Clan building series is over $100, I recommend you check it out.