Male
Montevideo (Uruguay)
Seen 2 Hours Ago
Posted 10 Hours Ago
2,892 posts
13.3 Years
226
November 11th, 2017 at 11:03 AM , since edited
After spending some hours in getting my icon to work properly, I finally reached the Step 2.
Instead of following the tutorial's method which uses Hex in order to modify the Type Effectiveness table though, I decided to use esperance's Type Effectiveness Editor 3 which apparently worked just fine judging how 24F050 has nothing but FFs until 24F21D. It looks like the tool deleted the old table and automagically told the game to use the new one.

Anyways, the problem I'm having right now which I don't think is related to the tool though, is that I can't modify an attack's type in order to test if the stuff's working correctly.
I added the line 17=Fairy under the line 11=Dark inside the [Types] section of G3T's \Customisation\Moves Editor.ini file.
Then I changed Squirtle's type to Dragon just for the test's sake and when I was about to change Scratch's type to Fairy, G3T gave me this error: 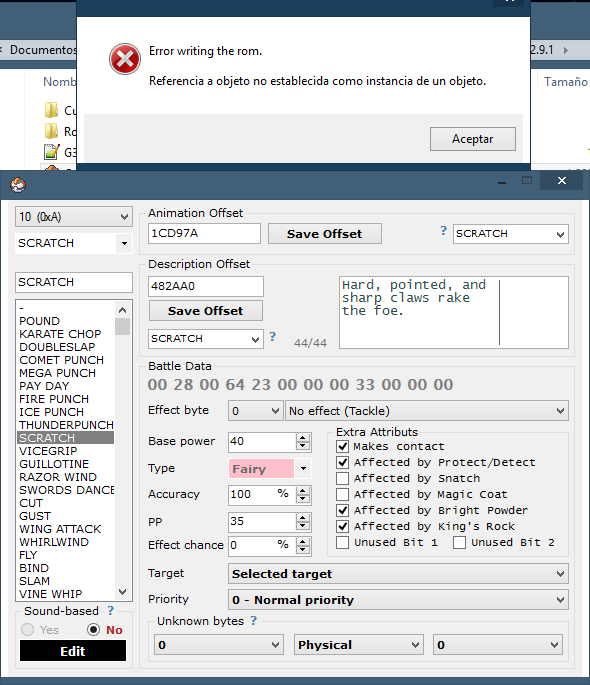 Halp?
EDIT: Oh yeah, the 1st picture's error which is in Spanish, means:
"You're referring to an item that isn't established as an item" or something like that.
It's as if the program wasn't recognizing my Fairy type.

PM me if you want to trade, or add my FC.

Seen July 5th, 2020
Posted July 4th, 2020
244 posts
4.2 Years
228
October 6th, 2018 at 4:25 AM
So I edited the effectiveness chart of the ??? type and it seems to be working, although I'm curious what are the side effects of using that type? I read something about struggle having side effects but I haven't had time to test that myself yet.
Pokémon Kanlara Ultimate
Pokémon Kanlara Classic 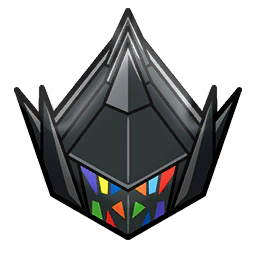 Male
India
Seen November 14th, 2021
Posted November 22nd, 2019
699 posts
5.7 Years
229
October 6th, 2018 at 5:06 AM
Originally Posted by Sakakii [ Original Post ]
So I edited the effectiveness chart of the ??? type and it seems to be working, although I'm curious what are the side effects of using that type? I read something about struggle having side effects but I haven't had time to test that myself yet.
Eggs use ??? type and it is also used by some moves. I think you shouldn't replace it.
HGSS OWs in FR Style
Fire Red NSE Bookmarks

Male
India
Seen November 14th, 2021
Posted November 22nd, 2019
699 posts
5.7 Years
233
February 7th, 2019 at 9:10 PM
Originally Posted by BiggestGuyUUUU [ Original Post ]
Hi, I'm on Mac using wine, and Import Sprite Data isn't working for me. All my bitmaps are in 256-color instead of 16-color like they should be. I've used an online converter tool to get the right results, but so far, nothing has worked. What should I do?
Better off to use Leon's Ultimate Rombase.
HGSS OWs in FR Style
Fire Red NSE Bookmarks

My Black Hole Eclipse will pierce the heavens!

Seen 9 Hours Ago
Posted 4 Days Ago
856 posts
1.1 Years
236
January 13th, 2021 at 1:38 AM , since edited
Originally Posted by GingerGuy173 [ Original Post ]
The images on this post are currently messed up. If anyone wants to use this tutorial with the images in-tact, here's a link to a Wayback Machine archive of an older version of the tutorial: https://web.archive.org/web/20140804211722/https://www.pokecommunity.com/showthread.php?t=313872
Thank a million for posting that it, helps a lot. I still can't figure it out but at least I know my tables has the right values in it, so I haven't messed that part up.

The icon counting makes 0 sense to me though.

The things aren't really in proper order for this guide. Several important parts are missing or in the wrong section.
Specifically the issue is how to count the type image to insert your icon coordinates, so your icon is actually visible.

And how to assign the proper ID to your new type.