Hello everybody, I do this tutorial for making your hacks a bit better (and custom), and, together, we could prevent the sale of illegal roms.

Some people have done this in their own hacks (Koder in Pokémon Caps, Alexmad in Pokémon Mitic Island), but haven't tutorial, therefore, I pledge to do so:)

Everytime (or rather, every time you open a Pokémon rom), you'll see a screen like this, or similar:

And most of those who have have edited this, has only edited the letters. But it's very little, and in my case, I want it to be totally different (I would avoid selling my hack, and customize a little more). We will use these tools:

-Our imagination (not a tool, but it is very important if you want to do things without using my resources (below is the download of my resources)).

-Microsoft Paint (yes, that is included in all Windows installations (MSPaint.exe): I recommend the Windows Vista/XP/2000 paint ... but not the new of Windows 7, it's uncomfortable.

-FreeSpaceFinder (FSF) or Thingy32: To search for available space.

-GBA-unLZ: To insert the image and tilemap.

-AdvancePalletteEditor (APE) or another palettes editor.

VisualBoyAdvance: To test if it works.

Then we should begin to work!

STEP 1: Make our own screen in paint.

I made my template with the background of the second screen in a battle, in Pokémon Platinum, and I use the fonts.

Many will think that insert this template is impossible, but it's not, follow the tutorial and see how it works.

STEP 2: Remove the tiles wich are repeated in the image, and remember, use the eraser to the size of 8x8.
In MSPaint, it's like this:

After erasing all the tiles repeated, we must sort (or disorder), but get more empty space. If there are empty spaces, fill it, or leave as is. (REMEMBER: It can only have 16 colors)

Remember: In NTME flip images, so if a tile that is the same if flip it, you can remove the other.

After having done these things, it should be something like this:

Now we have to index the image and save it in .GIF

Mine is indexed, and to be in. Png, and for those who want to know how I did, here are the steps:

1) Open the image with MSPaint.

STEP 3: Open any editor tilemap, although I recommend NTME, because you can flip images and so you save more space (and bytes). Build the image as you did. This is mine:

[important] The height and width of this tilemap must be 32x32 (if not, it doesn't work) and always starts at the top left. Used to adjust the "+".

STEP 4: Save the tilemap, and it is time to see how big is the tileset. Find the tileset, right click -> properties and look for "Space" (I think (size is in English)), we can see how big your tilemap, to use the FSF (FreeSpaceFinder).

STEP 5: Open the FSF (FreeSpaceFinder) and start searching for 2512 bytes. Copy this address.

Open unLZ, load the rom that you want to use. In my case was FireRed.
Remember, usually the tilemap (. RAW) images are from the address just after the image.
Directions:

Go to the direction of the image. In this direction, select import image, select Write To ROM, and in "image offset", paste the address of the FSF get (must be 8 numbers, and if you have only 6 or 7, add one or two zeros (0)).
Select everything except "Export Pallett (that would be Export Image, New Image Auto Abort if Bigger and Automatically fix pointers), select OK. REMEMBER: Id doesn't matter if the image is bigger.


When you import the image in the box below you have the pallettes in order (I mean that when you go to insert the pallet should be in the same order). I recommend to make a screenshot (screenshot) of the screen, paste in paint, so you can more easily use the color picker in APE.


After importing the image, go to FSF, search for 2048. Copy the address, and in the unLZ, go to the direction of Tilemap (.Raw). When you're out there in the menu bar, go to File - "Load ...", and select the RAW tilemap you created. Select open. Write To ROM, as before, paste the address of the FSF, adding zeros are required (must end up with 8 numbers), select Export all Pallett. Select OK.

STEP 6: Go to VBA, and see how the image has been (though this is optional):

(Pokémon Emerald inserted with the background).

Since there is not much, but of course we have to change the palletes, so let us begin.

Go to APE, find the pallets intro (down) and replace the order they were in the unLZ.
Offset of the pallets of the introduction:


After changing the pallettes, it'll be as wanted.

I've left the resources that used for those who want to make their own images. Putting credit or thanks is optional.
http://rapidshare.com/files/249614391/tutorial_resources_by_Chaos.zip.html
http://www.megaupload.com/?d=VYPXZP4B

I recommend you to change it as this avoid sale of illegal ROMs.

For those that are vague, the tutorial seems very long, but for those who are satisfied with my contributions, with about 10 minutes you have plenty of time, if you understand how.

I hope that the tutorial have helped you!

Male
The Bay Area
Seen May 18th, 2019
Posted August 13th, 2012
1,590 posts
12.8 Years
3
July 14th, 2009 at 1:08 PM , since edited
Well if you want an anti-pirate screen, this thread can help you out with that. The patches available there will insert a screen before the screen that you edit here so that you can have a message telling people not to sell the hack and have a copyright screen.

Well this is a nice and simple tutorial, easy to follow and it's got pictures (always a plus^^). Very helpful, thanks!

The rocks cry out to me

Ready for simply anything

Still busy working on my hack. 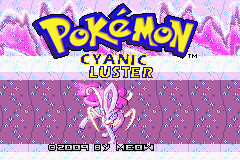 Not bad don't you think?
My other one went nuts!
So I made a new one!

One of my favorite
quotes!

Mr. Flak: Oh, and Mr. Larkin, perhaps you'd
like to share with the rest of the class,
Patrick Henry's immortal last words.

Man I love that!

Do not remove the tag until you fix the issues in your signature. You may be infracted for removing this tag if you do not fix the specified issues. Do not use this tag for decoration purposes.
Show disabled signature.
Challenges:

I guess I'll never be able to use this for my team rocket hack, no matter how good or bad it turned out to be:

I spent so much time on that .raw image too.

I give up
"Strong pokemon, weak pokemon. That is the only selfish perception of people. Truly skilled trainers try to win with their favorites." -E4 Karen

I like to push it,
and push it,
until my luck is over.

I can't say for sure because I haven't tried this recently but it looks to me as though you made the tilemap two tiles too thin. Try adding 2 to the width of the tilemap and then import it again.


Also I would like to help make your Step 1 easier...Download Sphere v1.5, open the 'editor', [File]>[Import]>[Image to Map]. Set to 8 and 8, ok for deleting duplicate tiles. Double click the created file, it will open up in sphere with a window that has a Tilemap, hit key: Prt Sc, Paste intp MS Paint and essentially crop the tile map and whatever the first tile is will have to be changed because there will be a pink box around it (which commen sense can fix in many ways).

It takes more than 400
billion pixels to reach
a star, but it takes just
one to make a difference.

If you want to join pm me and join the group; Team Myth.

What I Will Need:

- Tile editor and Inserter.
- Sprite maker and inserter.
- +++More things that i dont want to whrite here right now.
- Do you want to do something for this hack pm me!

Age 25
Male
India
Seen 1 Week Ago
Posted June 29th, 2020
147 posts
12 Years
25
November 9th, 2013 at 1:46 AM
Originally Posted by Haxxox [ Original Post ]
I doubt the OP is still around to answer this but can anyone explain what he does in step 2? He just goes from having a normal image to a scrambled up one.
What he does is break up his titlescreen into 8x8 tiles (squares of side 8 pixels), then removes all the tiles that have already been used (repeated tiles).

edit. This tutorial is outdated, and you can actually do a lot of the manual work automatically using Sphere Editor, (the only difference being Sphere's tilemaps don't remove flipped tiles, so your image will use a little extra space). Search this forum for another tutorial using the keywords "bootscreen editing", there was a really nice tutorial as a part of a compilation somewhere here.
Emerald font patch for FireRed
Ruby Font and Text Box for Emerald
No Music Patches for Emerald & FireRed